So today I made the pilgrimage to Thomasville, NC to “Mini Mecca” of the Carolinas – GrassRoots Garage. I had an appointment to have my two remaining pre-Dragon mods done – a 15% pulley install and a one-ball exhaust mod. I’ve done EVERYTHING else to Blimey myself. But these two are beyond my skill level… They are DEFINITELY not beyond Dan Zipkin’s…

If you’re not familiar with Dan and GrassRoots – Dan is a highly certified and highly rated BMW technician who was selected to be the first MINI technician in North Carolina, back when Flow BMW acquired their MINI franchise. Dan got MINI trained and certified, and performed prep and dealer option installs on almost all of the first year’s MINIs delivered in North Carolina. As Flow grew their staff of MINI technicians, Dan trained and supervised the team. Eventually Dan took an opportunity to move on to the area’s Bentley dealership – but remained in high (and growing) demand for off-hours work for the area’s MINI community as one of the most knowledgeable and experienced MINI mechanics around. Eventually Dan opened his own garage – GrassRoots – to service the growing MINI community. It’s now sort of a rite of passage for a MINI enthusiast here to go spend a day with Dan, have him take you for great barbecue for lunch, and leave with a more capable MINI. 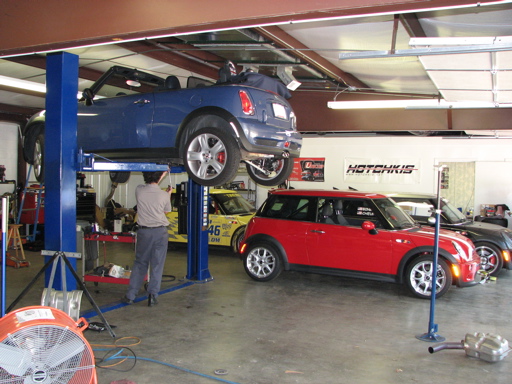 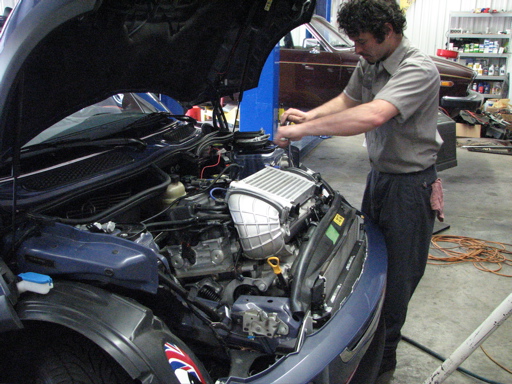 So – after that brief pause for a commercial interruption –

Dan prefers CravenSpeed pulleys. Craven produced some special, very cool pulleys for Dan, laser engraved with the GrassRoots Garage logo. And RED – which we all know is the fastest color. 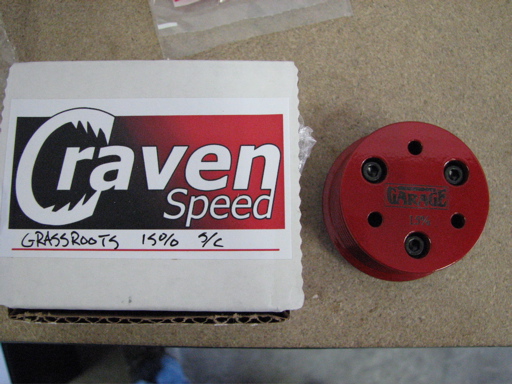 After much consideration, I opted for a nice, conservative 15% pulley – this pulley is 15% smaller in diameter (and thus circumference) than the stock supercharger pulley. As a result, for any given engine RPM, it turns the supercharger (and water pump) 15% faster than stock. I’ve never heard of anyone having engine problems with 15% pulleys – but there have been some folks who have reported issues with smaller pulleys.

An interesting sidebar – Dan had a JCW pulley in the shop that had been removed to fit a smaller pulley. We took a pair of calipers to it and it was – hold onto your pants – 10.4% smaller than stock. NOT the 14.something% commonly thrown around as fact. The Craven 15% pulley measures 15% smaller than stock.

So… a pulley install is a bit more involved on an automatic transmission MINI than on a manual – and after watching Dan do it, I’m darn glad I didn’t try it myself. To access the pulley, Dan puts jacks under the engine and transmission, disconnects the mounts for these, and lifts the engine to expose the supercharger and pulley. Then a pulley puller is used to remove the stock, pressed-fit pulley from the supercharger shaft.

Here’s the stock pulley with the puller attached: 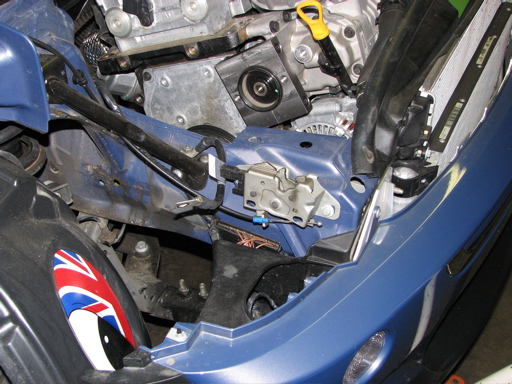 And here’s the engine with no pulley: 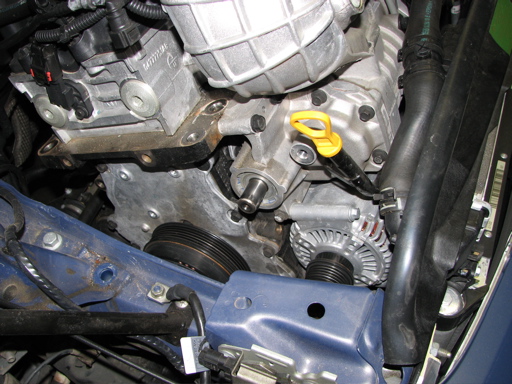 And here’s my nice, new, engraved, RED 15% pulley, with belt and tensioner re-installed! 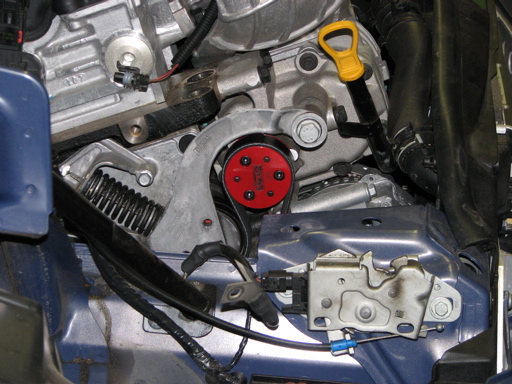 See how easy that was? hehe

Dan did a LOT of steps before, after and in between these photos. One thing we did: there is a rubber grommet in the bottom of the stock airbox, with a hole that enables the airbox to get a bit of cold air from the cowl area. With the Dinan intake, this is still in place. The hole is probably 25% as large as it could be – the rest is covered by a useless rubber membrane that restricts flow. Dan cut away the extra material to effectively open my Dinan intake even more. Extra cold air for $0 – I like!

After a lot of studying available exhaust options, I chose to go with the aptly named “One Ball Mod” of the stock MCS exhaust. In the stock exhaust system, exhaust gases flow out the exhaust header, through the catalytic converter, through an almost-straight pipe to the rear of the car. Gases then flow through a resonator on the passenger side, through a muffler on the driver side, and out twin tailpipes. This modification removes the resonator (the big, heavy can on the passenger side of the exhaust system) and re-routes the exhaust pipe to the remaining muffler. The result is less weight (about 20 pounds), a little more volume and “growl”, less backpressure, and better flow resulting in more power. And MAYBE less “drone” at low RPMs and highway speeds. And the only cost is some labor to perform the cutting and welding required. 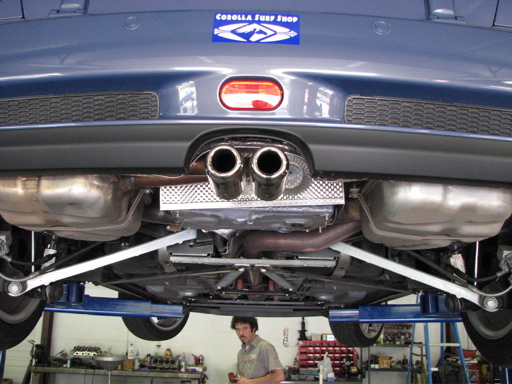 After the initial cut, Dan re-installed the straight pipe on the car, to assist in lining up parts to be welded. I bet this would sound NICE… 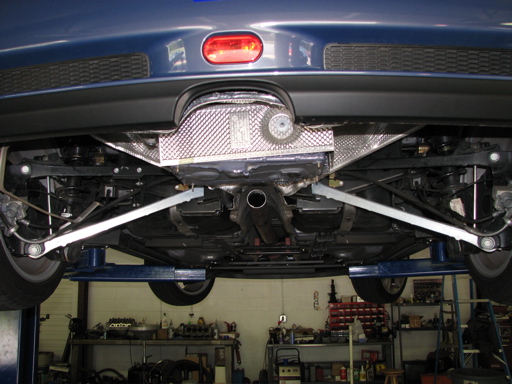 Then Dan cut off the resonator, and cut out some pieces of pipe to use for the re-routing. Here’s the now-worthless resonator… 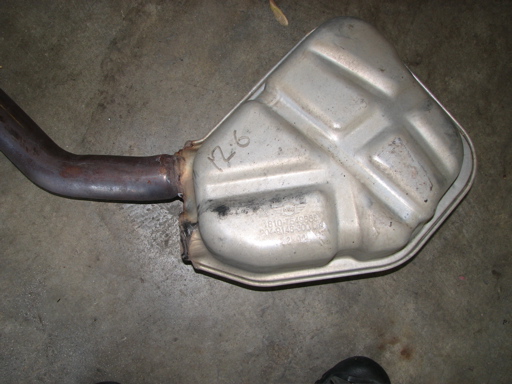 He then placed the muffler/tailpipe assembly back on the car and spent a while test fitting and modifying a couple of sections of pipe until he had the fit “just right” – then he tacked everything in place with the welder. REAL men fearlessly weld inches away from full plastic gas tanks… 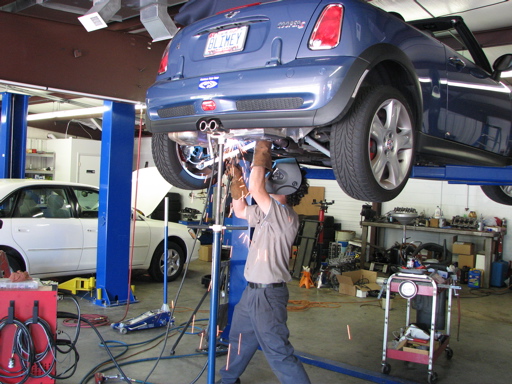 Then he removed the whole assembly from the car, completed welding the joints, let it cool, and reinstalled the system. Here’s the result. Dan did a fantastic job getting this to line up – it’s straight, the tips are centered, and it’s solid. 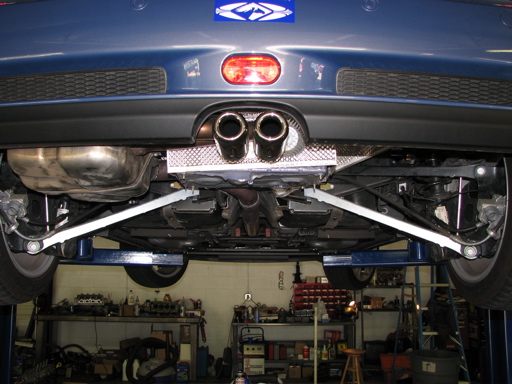 The re-routed, welded pipe – no holes, plenty of clearance in all the right places. Not as pretty as a brand new $700 stainless system – but for $100, it’s a thing of beauty to me! 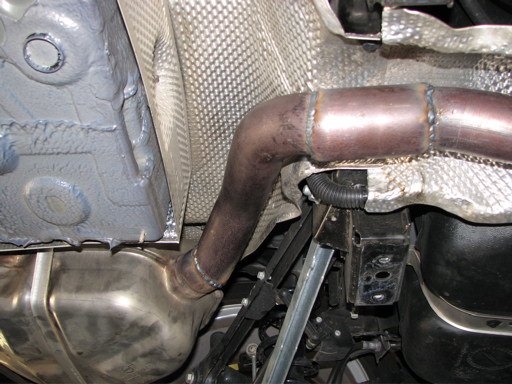 I love the way this sounds – more growl, a little more volume, it amplifies the burble a bit, but it’s not obnoxious and not at all “ricey” sounding. 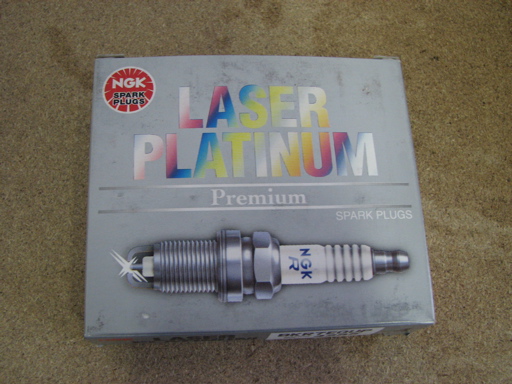 These are the same plugs sold as JCW – just without the JCW price. They’re NGK number BKR7EQUP. These cooler plugs should help prevent pre-ignition and/or fuel “dumping” with the pulley. Soooo…. now Dan has 8 plugs left. The first 4 are installed in Blimey!

And, while I was there, I had Dan download my ECU to have an MTH tuner file generated. I have my first scheduled dealer service after the Dragon – after that, if they don’t flash the ECU, Dan will have MTH generate my tuner file and I’ll stop by for an extra “boost”… more to come on that later…

I drove the 2 hour route home – over some moderately twisty, open country roads. The pulley and exhaust, combined with my existing Dinan intake, are AWESOME! There’s significantly more pull and power from about 3000 RPM up to redline. And I LOVE the sound – both the added supercharger whine, and the improved exhaust sound. It’s all good! Blimey loves more throttle!