I’ve written previously about my OutMotoring gauge faces. I really like the way they look vs. the OEM gauge faces. But there’s one little quirk with them that’s been driving me nuts. Normal people wouldn’t care. But normal people don’t have blogs devoted to a clown car.

There’s a section of the tachometer, between about 5300 and 6700 RPM, where the little hash marks don’t light up completely. Like this: 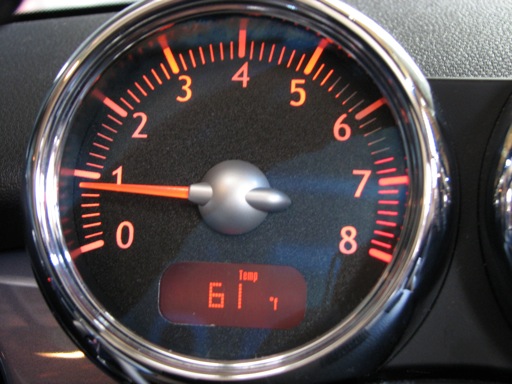 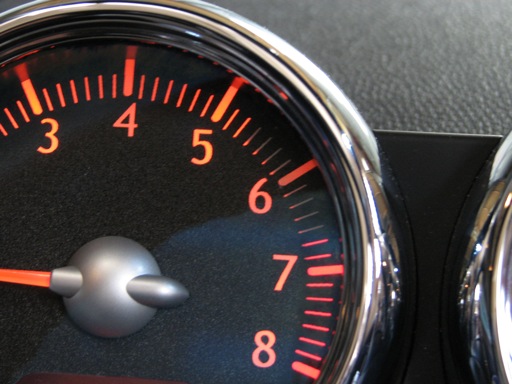 I had assumed until yesterday that this was a printing defect in the gauge face. Since Aaron at OutMotoring let me be the guinea pig for these faces and they were free, I wasn’t going to complain about it.

Well, then I see a thread on NAM about this very issue. Turns out it’s not an issue with the faces per se – it’s an issue with the gauge itself. Turns out that the area under the gauge face where it’s dark is actually “walled off” and there are some extra red LEDs under that that never come on. They’re designed to illuminate on the European diesel MINI to show its lower redline. And they use the same gauges on the diesel. Looks like perhaps Aaron didn’t take this into account when he designed his tach faces. Heck, I wouldn’t have, either – never even heard or thought about this until now. The OEM faces actually DO have little hash marks in that part of the face – but they only light up on the diesel, and then they light up red…

Below, you can see the “walled off” part of the gauge for the redline LEDs, with the face removed. 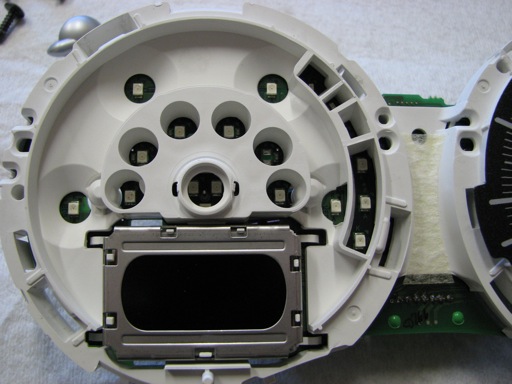 The section on the far lower right end is where the three LEDs for the redline are housed – the wall keeps the red light from bleeding out into the other areas of the tach. Above that are three small “boxes”. The first and third house additional small red LEDs for the diesel redline. The middle one houses a small red LED for the diesel redline, and a larger orange LED for lighting up the 6000 RPM large hash mark.

Well, since I never plan to convert my car to a diesel, there’s no need to keep those extra partitions in there. So let’s get rid of ’em. Whadaya say? 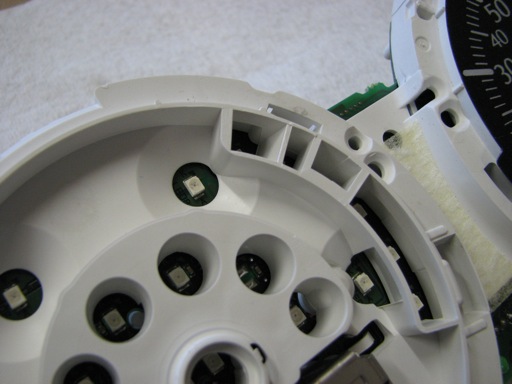 While you certainly need to make sure you don’t accidentally damage the LEDs, otherwise this isn’t particularly precision work. No one will ever see the inside of this gauge (not even a mechanic – because the whole gauge assembly is replaced if it breaks). I thought about using a Dremel tool to cut or grind the extra plastic out – but didn’t want to create lots of plastic dust in there. So instead I used a much less glamorous approach. I nibbled it out with my small diagonal cutters and small nippers. 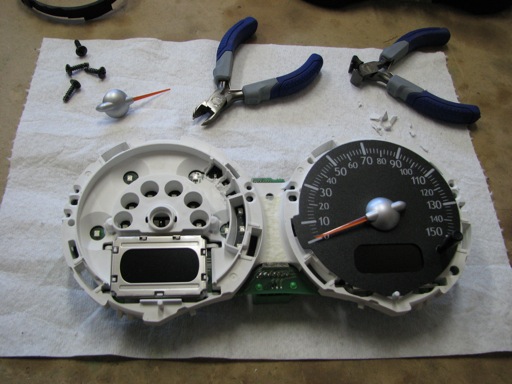 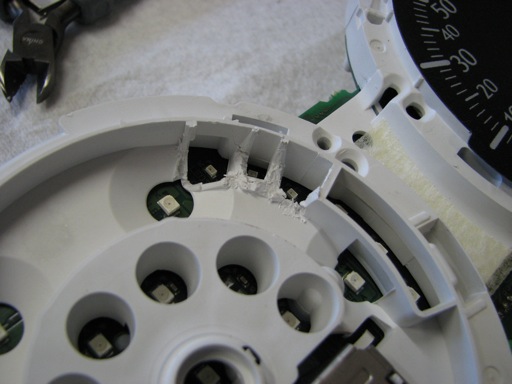 And here are the remnants: 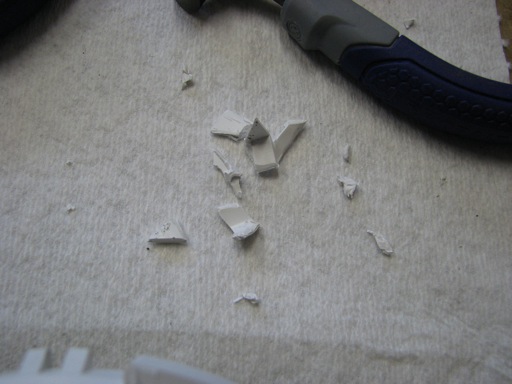 I could have spent a long time getting this beautiful and perfect. But it wouldn’t have mattered. In fact, I only spent about 3 minutes nibbling the pieces out. If I had done this when I did the original installation of the faces, that 3 minutes is the only extra time it would have taken. Instead, it took me about half an hour including all the disassembly, reassembly and picture taking time.

The results? Take a look… 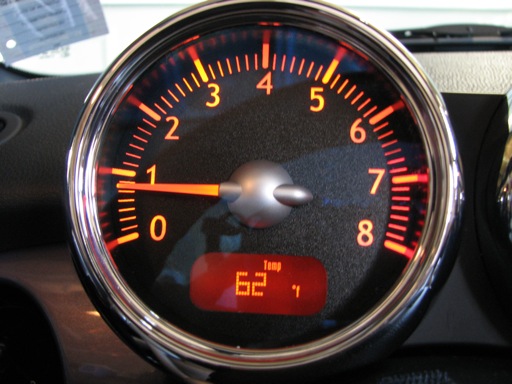 The colors don’t show up well in the photos – but the redline area is pure red like it should be, and the rest is orange – like it should be. The area from 6100-6700 RPM is a *little* dimmer than the rest, but it’s MUCH better than it was before. Close enough that you wouldn’t notice anything if you didn’t know what was behind there…

Thanks to heyitzsuchiboi for the idea!

After seeing it in the dark and looking at the photos some more, I decided I could do a LITTLE better – and it was worth trying. So I cracked it back open and got a bit more aggressive in my trimming. The objective was to open up the area around the orange LED under the “6” hash mark better – to allow it to flood the previously dark area with more light.

I’m glad I did – because I learned some more and it’s now *perfect*. Turns out that the LED that I THOUGHT was the one for the “6” hash mark wasn’t – the center small LED is actually another red one that doesn’t illuminate. There’s a larger (same size as the others) orange LED that’s actually hidden under the plastic under the edge of that center compartment. I CAREFULLY trimmed away more of the bezel and now it looks like this: 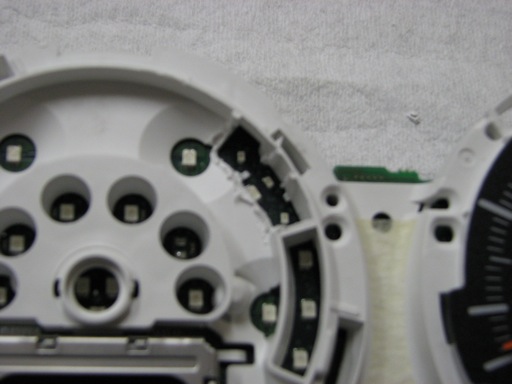 Sorry for the blurry pic – best I could do in the low light. But you can see how much more “open” this is. Note the trimmed area has three small “blocks” on the circuit board – those are the diesel redline LEDs. Note that just to the left and below the center of the small LEDs is another larger white “block” partially obscured by the white bezel – THIS is the orange LED that lights up the large hash mark for 6000 RPM. Now with it exposed, it floods that whole area with more bright orange light – and the result is perfect.

Cutting this much out is a little scarier – because you’re getting much closer to the circuit board and the LEDs. It appears that you can remove the white plastic bezel completely – I started to try, but then decided to trim it in place. Still, I suggest you remove the bezel if you’re going to cut this deep, because that orange LED is RIGHT under where you’ll be cutting… I got scared when I exposed it, hoping I hadn’t damaged it – I hadn’t.