I have two problems. Most of you haven’t noticed them. But I need to fess up.

There. I said it. I feel so much better now that you all know my secret shame.

Even though I told my Motoring Advisor, on the day that I picked up my car, that I planned to leave it “pretty much stock”… well, I had no idea what the next couple of years behind the wheel of my MINI were going to do to me… I NEEEEEED more power. NEEEEEEED it. Bad. Always. This is a story of how I got some.

After reading a lot about the Revolution MINI Works (RMW) camshaft, I decided that it matched my objectives for the car – specifically, it adds more mid-range torque, right where you need it for spirited street and twisty driving. If you don’t know what a camshaft is or what it does, read this. And don’t feel bad… several months ago, I was pretty clueless about this particular engine component. In short, the camshaft controls the opening and closing of intake and exhaust valves in the engine’s cylinders. This controls when mixed fuel/air can be pulled into the engine, and when  burned exhaust gasses can be pushed out. While this is a simple concept, fluid dynamics are quite complex when the cylinders are filling and exhausting thousands of times per minute, and fairly subtle changes in when the valves open and close, and how far they open, can have a significant impact on the flow of fuel/air and exhaust. And what is optimal at one RPM ends up being less than ideal at other RPMs. Every camshaft is a compromise between smoothness at idle and low RPMS, versus ultimate flow at high RPMs. The RMW cam is focused on mid-range performance improvement, with only slight reduction of smoothness at idle.

I had hoped to have my cam installed prior to my dyno tune – but RMW had stock problems…. so I couldn’t get the cam in time. Jan tuned my car a little rich to allow for the cam… and then I waited for the cams to be available again….

While I was waiting, I decided to go ahead and bite the bullet, and add the RMW “Shorty” Header. Others have found that the combo of the cam+header is really a fantastic addition for street cars. I’ll talk more about the Header later… but these were also on backorder…

Finally Dan at Grassroots Garage got my cam in, and we scheduled an installation date. While I could have probably figured out the cam install, I feel safer letting Dan do anything that involves cracking open the engine… I’m glad I did, because I would have been pretty lost and terrified if I had done this job myself. 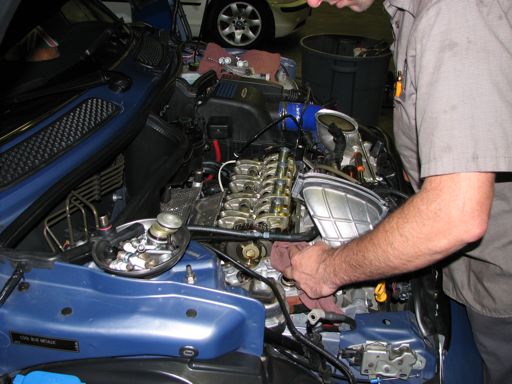 The lifters and the OEM cam on Dan’s clean bench: 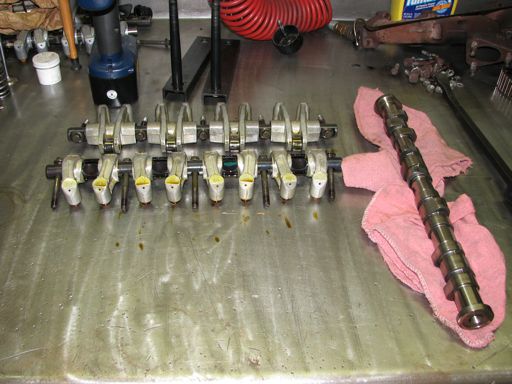 The two camshafts compared – the RMW cam is on the right. You can visibly see that the lobes are a bit taller – meaning that the valves will open a bit wider. 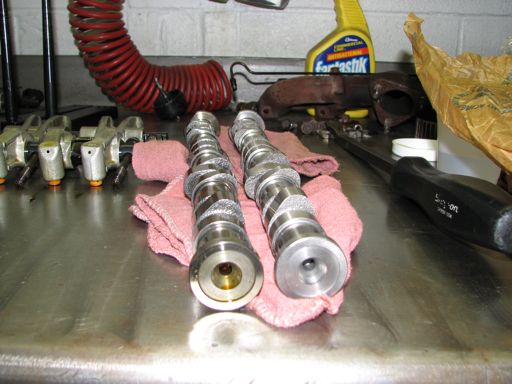 Dan fitting the new camshaft in place. Note the zip-tie that holds the timing chain onto the gear – a nice trick. 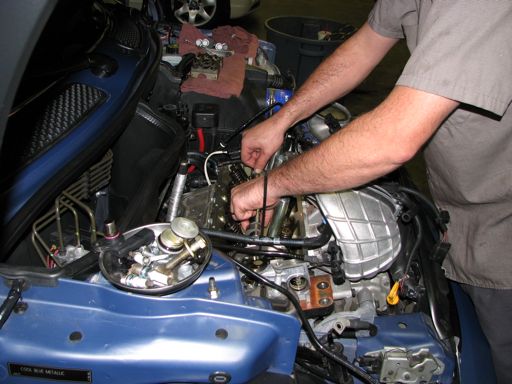 The difference with the camshaft installed is IMMEDIATELY recognizable. The car has a very slight “lope” at idle, with revs fluctuating up and down just a bit between about 600 and 800 RPM. On the street, the car has noticeably more “umph” between about 3500 and 5000 RPM – it pulls significantly harder – probably 5-10ftlb of torque here. Very nice. Engine sound under load is perhaps just a little louder or more aggressive, but not much.

I drove the car like this for about a month before my header arrived. Not a night and day transformation compared to how the car was before the cam, but a very nice and noticeable improvement.

Then the header arrived. And my life changed forever.

It’s almost to beautiful to hide under the car. 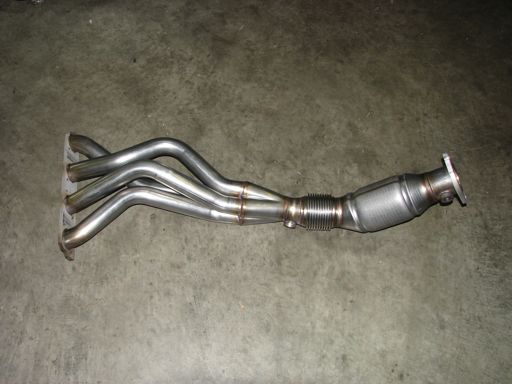 The MINI’s OEM exhaust manifold/header/cat is the most restrictive part of the exhaust system. Take a look at the OEM header beside the RMW Shorty – they’re very different animals: 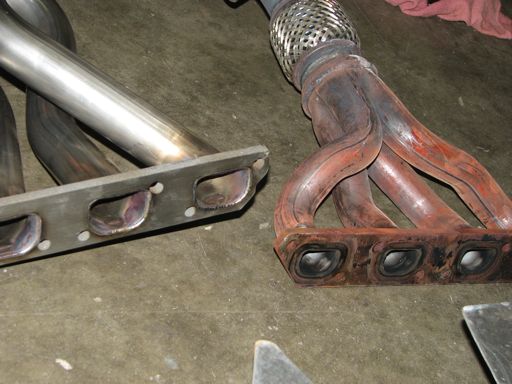 Above are the exhaust manifolds from each header – where the exhaust gasses leave the engine and enter the exhaust system. Look at how much smaller the OEM ports are on the right. 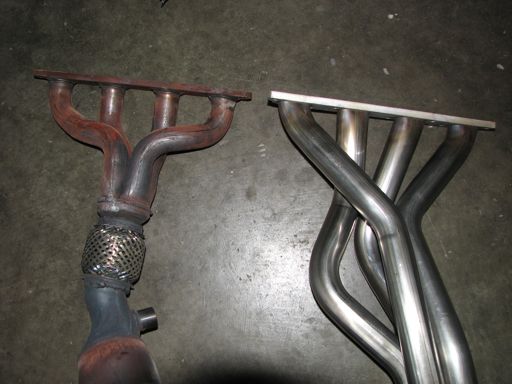 You can visibly see how much smaller the OEM “primaries” (the individual pipes coming out from each cylinder) are compared to the RMW header. You can also see the severe bends that these pipes make. These bends restrict exhaust flow, and also muffle sound. 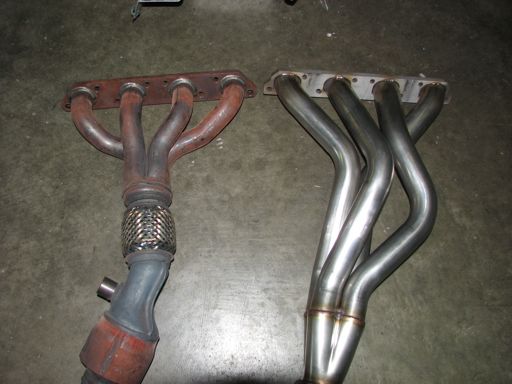 Above, pay close attention to the length and arrangement of the primaries, and how they come together at the “collector”. The RMW header has equal-length primaries – this is a key feature of this header, that makes it quite different than others on the market. By making the primaries the same length, individual exhaust pulses from each cylinder flow smoothly through the collector and into the main exhaust, without “colliding” on the pulses from other cylinders in the collector. The RMW collector at the bottom right is a radically different design than the OEM one, providing an unrestricted flow of exhaust pulses into the main exahaust. 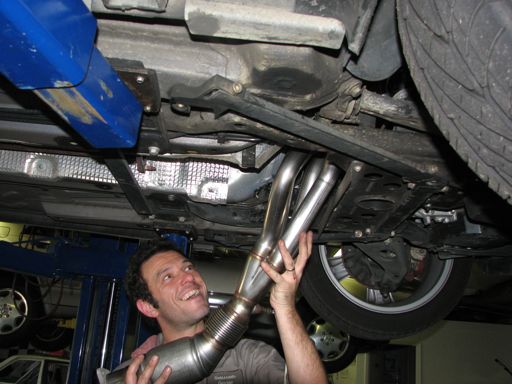 The view of the header installed, from the top. So pretty, it’s a shame you have to cover it with a heat shield to keep from cooking your coolant and power steering fluid reservoirs… 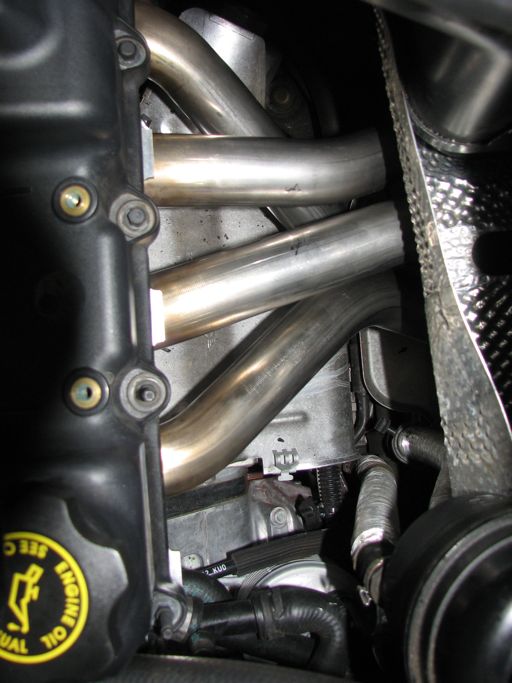 On the street, the addition of the header to the cam TRANSFORMS the car. Really. It is a different beast than it was before. Ask RudyT… he rode with me and invoked the name of the hallowed excrement. The car is MUUUUUCH louder with the header. My one-ball exhaust ROARS at wide-open-throttle. At high RPMs, it SCREAMS. And the change in torque is almost unbelievable – the combination of the cam and header probably adds about as much as the 15% supercharger pulley – probably 15-20ftlbs. I didn’t think you could get this kind of performance out of a MINI without a reworked cylinder head. While adding a head would add even more top-end performance, the cam and header really change the car between 3000 and 6000 RPMs, right in the sweet spot for performance street driving. And the car is no slouch on the track – at the Phil Wicks VIR event in November, my car and another with the RMW cam and header were as fast as any MINI, other than a couple of full-track-prepped cars with big valve heads.

I’d do these mods again in a heartbeat. But be prepared for the change they will make to your car. My wife will still drive it, and it doesn’t scare her, but it’s as loud as she would be willing to endure. When I back into the garage, the entire house vibrates at the frequency of the exhaust pulses. I’m not kidding.