One side effect of the manual swap is my cruise control doesn’t work. I doubt it will ever work, it depends on the clutch pedal switch, and wiring that doesn’t exist in the automatic body harness. And I don’t plan to swap body harnesses…

Anyway, without cruise, the only thing left on the multifunction steering wheel buttons that I care about is volume control. So I had planned to delete the MFSW buttons, and install the JCW carbon fiber trim (thanks Dave.O!).

But I also have my now-nonfunctional paddle shifters left. I wonder if I can make them control the stereo volume?

So, time to do some research and testing on wiring again.

This would be easy if both the paddles and the volume control were plain old dumb switches that were wired directly to the transmission and radio. But, alas, not the case. The paddles work sort of like that, but the MFSW button cluster is “smart” and communicates with the body module digitally over the car’s K-bus.

The Cruise Control pod is the “smart” one that generates K-bus messages: 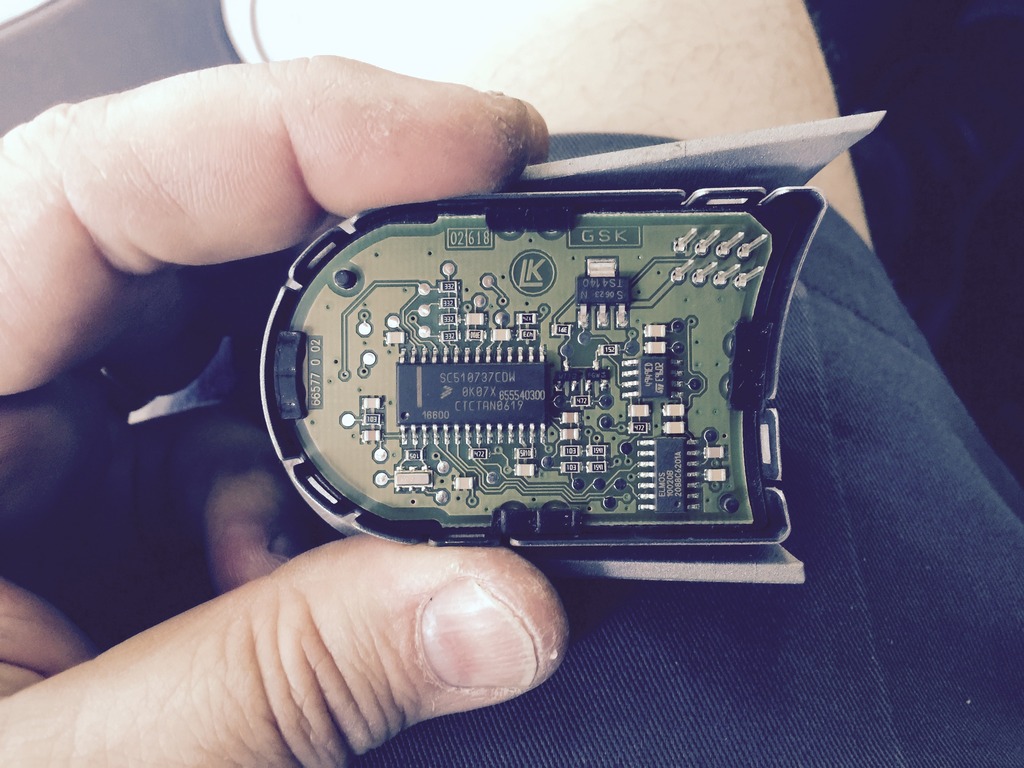 The audio/phone pod is “dumber” – it appears that it acts sort of like a slave to the cruise pod, and presents different resistances in response to different button presses, which are interpreted by the cruise pod. Or something like that.

So I need to make some analog switches activate a function that is driven over the K-bus. Quandary…

Now, there’s an elegant way to do this. That would be to connect the paddles to some kind of interface that’s programmed to generate the proper K-bus messages. I believe are some third party devices out there that communicate with the K-bus. I could have researched that, found something, and bought it, but I’d still need to interface with the paddles somehow. Which would require some wiring, etc.

Instead, I opted for the brute-force method.

Let’s look at the audio/phone control board. 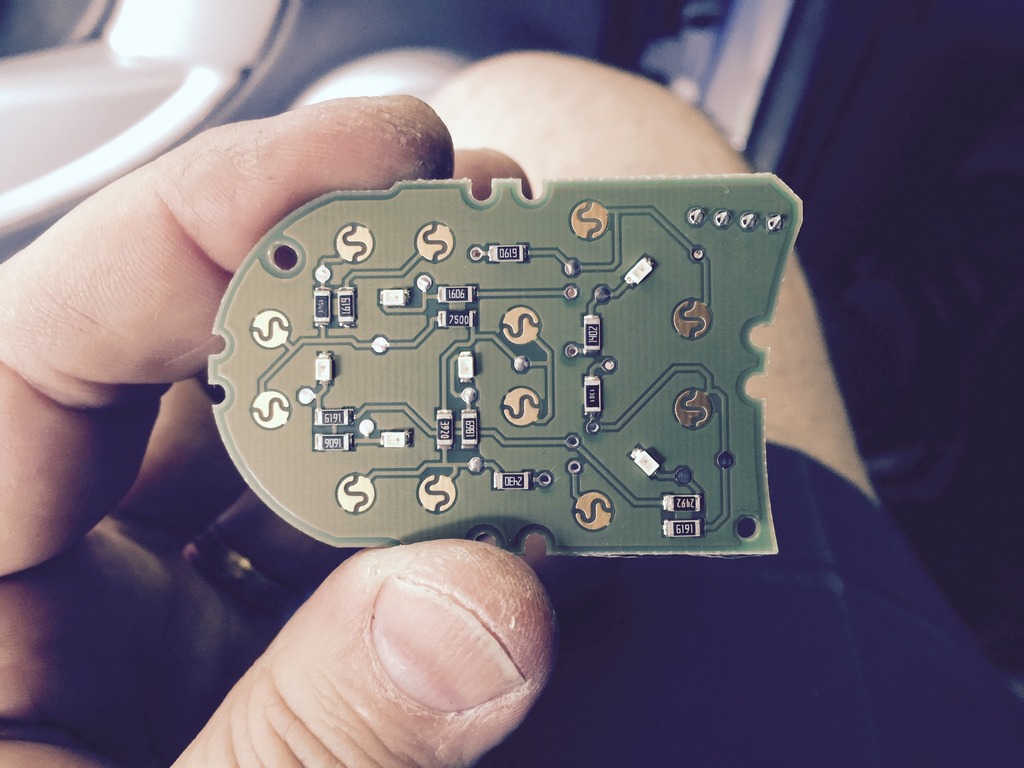 The little gold pads on this board are simple SPST switches. when you push the button, a conductive rubber mat contacts the pads and closes the circuit. Each button has two pads under it that are both closed, I assume this provides some redundancy for reliability and better user interface (you don’t have to push straight on for it to work well). I confirmed through testing that shorting EITHER pad triggers the desired function.

Sooooo…. If I can connect this set of wires to the proper pads on the volume control unit, the paddles will act as switches to close the proper circuits… and it SHOULD work… right?

Time to get serious. Got out my soldering station, and some fine, insulated solid copper wire. I picked one volume up and one volume down pad, and soldered two leads to half of each pad. The other half of the pads I bridged together and tied in a single lead to that. Ended up with this: 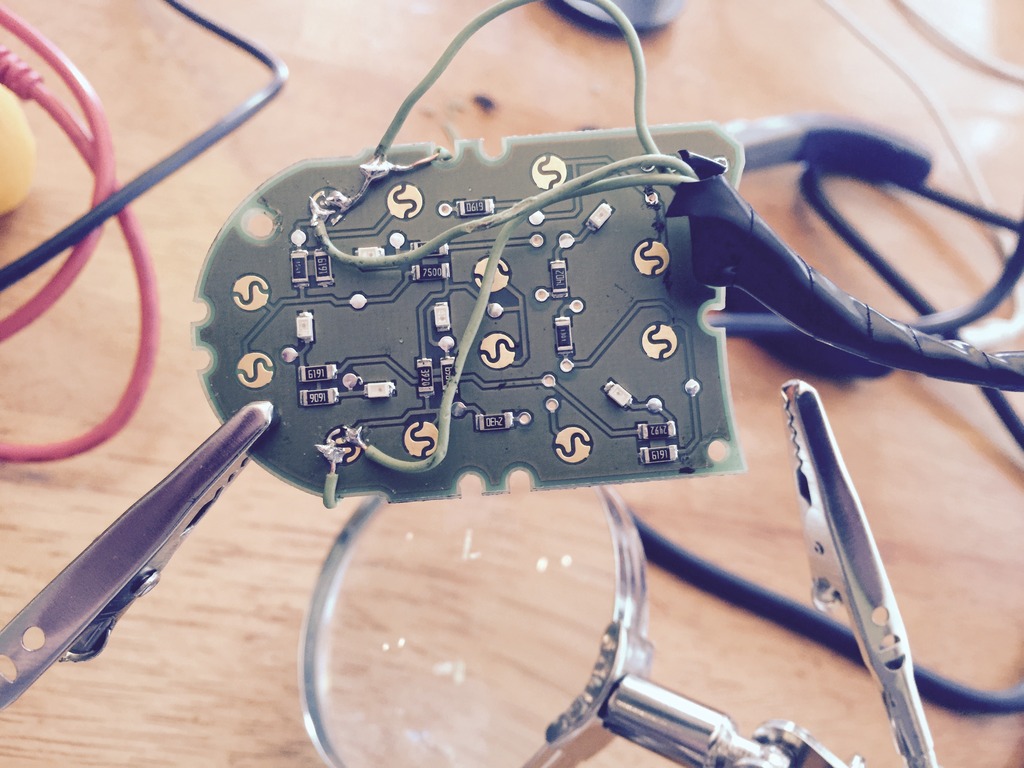 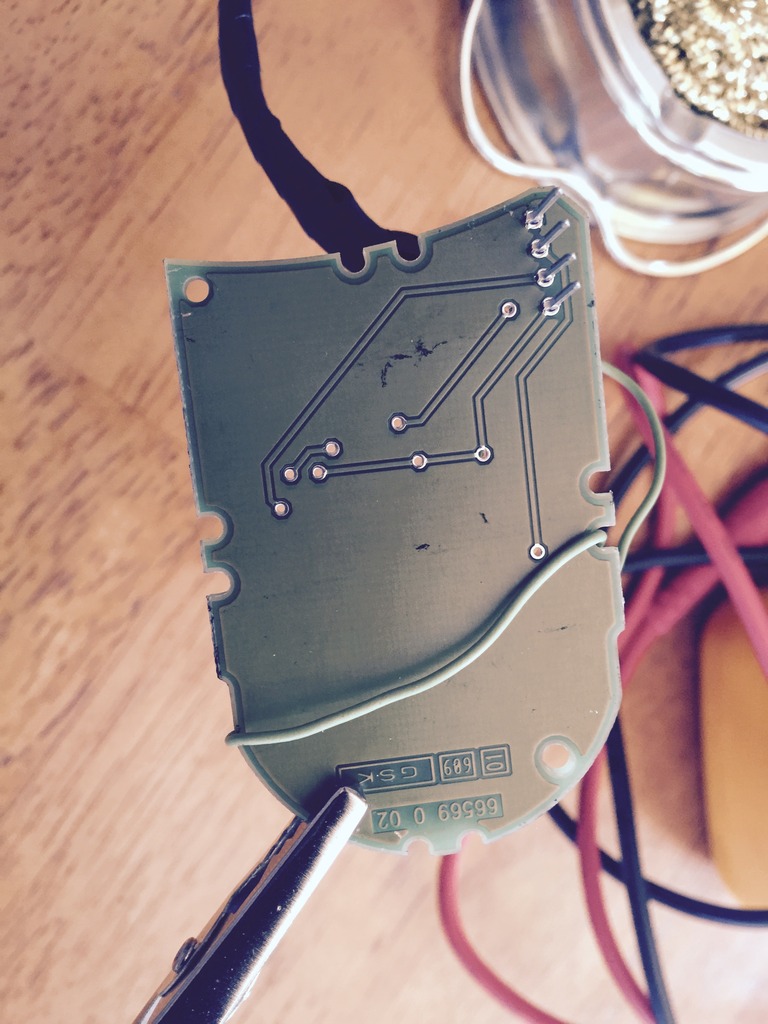 Did some testing, rewired a bit, and when working, I taped it all up. 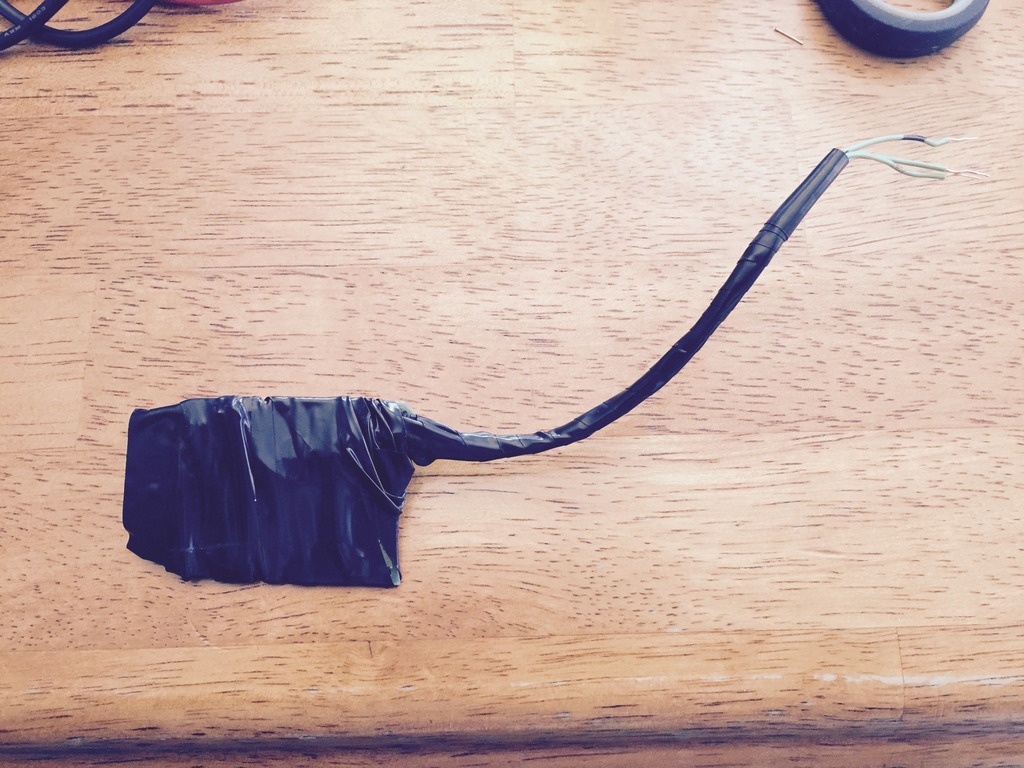 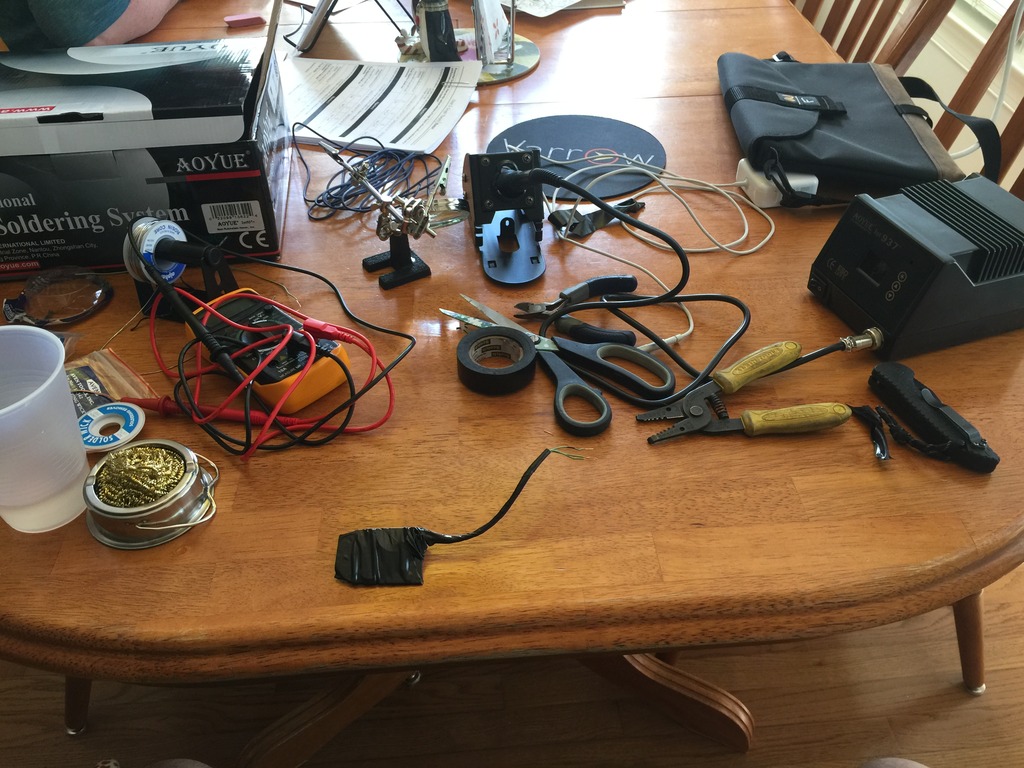 Back-probed the wires into the plug in the paddle harness, and taped it up so they stay put. Plugged the standard harness back into the circuit board.

I tape wrapped the cruise control unit also, and got rid of the shells and extraneous parts from the pods. Eventually these tape-wrapped boards will be hidden by the carbon fiber trim. 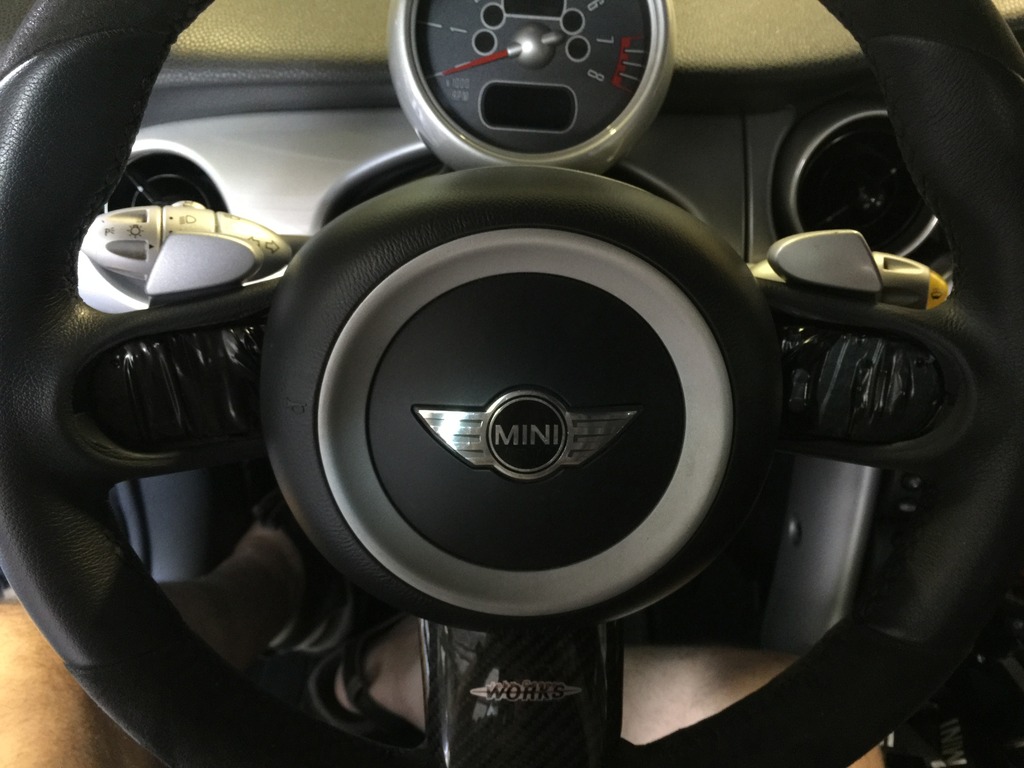 The result will be very clean and functional… but getting there was something of a hack.