Several folks have heard about how I (and others) put their cars on four jack stands using the 2×4 jacking method… I’ve explained it a number of times, but there always seems to be someone who is nervous about it and wants to see pics. Some things shouldn’t require pics. But I like to be helpful, even to people who probably shouldn’t be jacking up their MINI. So today when I jacked it up for the 5K wheel clean,wax and rotation, I took some pics.

Here’s my rig – a Harbor Freight race jack, two of my four jack stands, and a 38″ long piece of 2×4. A couple of inches shorter or longer would work. The 2×4 just needs to fit BETWEEN the jack point blocks under the sill. 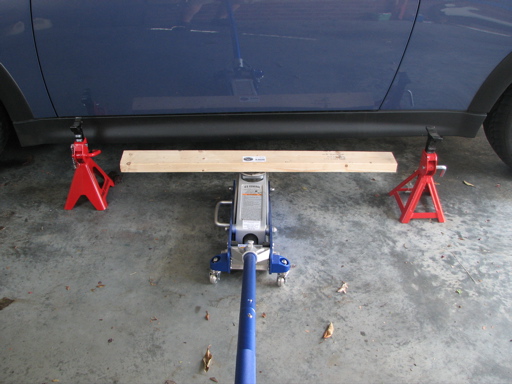 Here’s where I put the 2×4 under the sill. It’s slid under there until it hits a part that protrudes down further – so it’s resting flush on the flat, wide part of the bottom of the plastic sill cover. On the cabrio, there is an extra under-chassis brace that bolts near the rear end of the 2×4, and makes the back protrude out an extra half inch or so. No worries.

Note: More recently, I’ve cut my 2×4 so it fits between the front jack block and the rear cabrio brace mounting point – now it slides all the way underneath like it should, and I like this better. This is only necessary for the cabrio…

I was going for the Super Bowl Prince-esque phallic look with the jack in the reflection, but it didn’t quite align… I love how the funhouse-mirror-of-a-door makes it look like I have 12″ long legs. But they’re actually 19″ long… 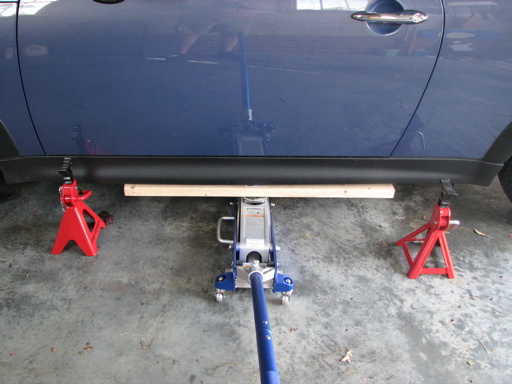 Then I just jack it high enough to get the jack stands under there. Today I just needed to pull the wheels – so no need to go high. Recently when I did my USS I needed it as high as I could get it – so I jacked it as high as the jack would go using the same technique. This will make some people nervous – so you could jack it halfway on one side, then all the way on the second side, then go back to the first side and jack it the rest of the way. But I’m not afraid of it sliding off the 2×4. Jacking the second side actually seems safer to me, because as the second side approaches the height of the first, the bottom of the sill is actually leveling out, so the 2×4 is at less of an angle as it goes up…

Have the jack stands pre-set to the height you’re going to use, and ready to slide under there. 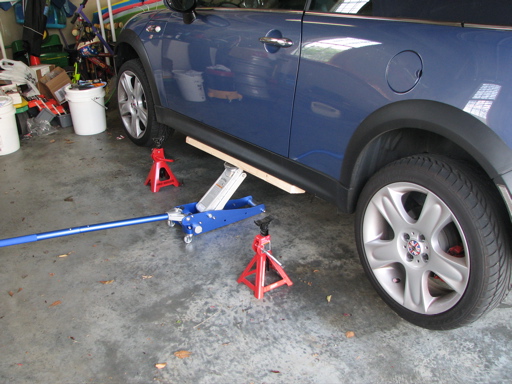 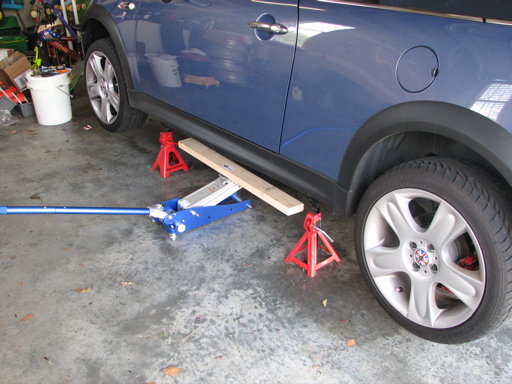 Now move to the other side and repeat. 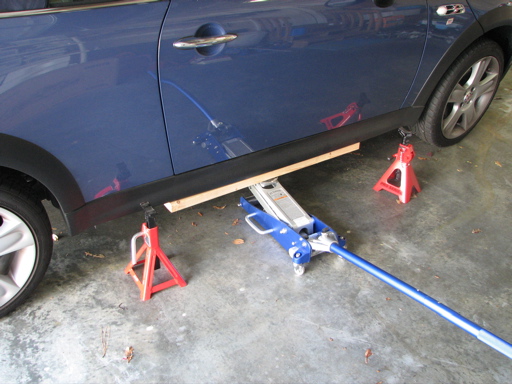 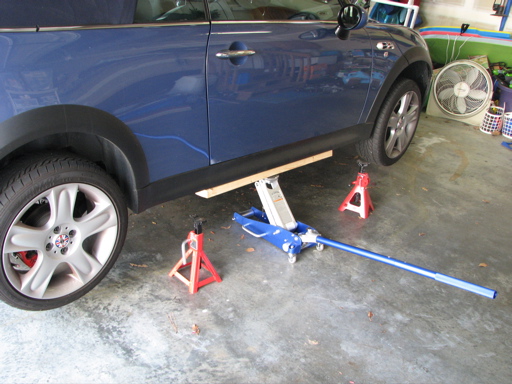 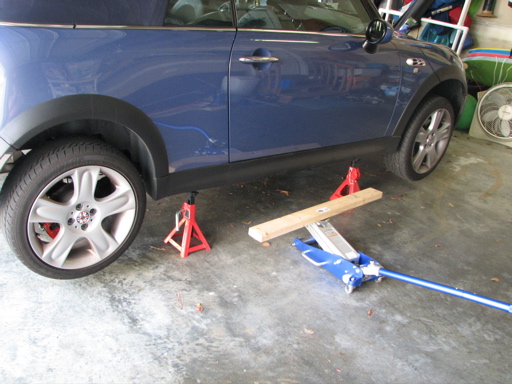 Voila – a 2006 MCS cabrio on four jack stands. Without pausing to take pics, I can do this in 2 minutes or less. 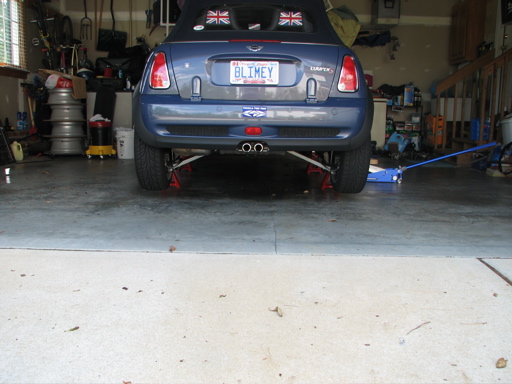 And yes, to do the rotation I could have just jacked one side at a time. But it’s more convenient to have all four wheels off and be able to get the “assembly line” going. Today I removed the wheels, washed the wheels and tires, treated tar specks with tar remover, waited, washed the brakes, suspension and wheel wells, scrubbed off the tar, dried the wheels, hand rubbed them with Scratch-x to get the rest of the gunk off, wiped them off, touched up some curbed spots with the Dremel sanding drum and touch-up paint, waited for the paint to dry, applied Wheel Shield, let it dry, buffed it off, reinstalled the wheels, applied Extreme Shine tire treatment, waited, wiped off excess. I would eat of these wheels. 😉