Primary objective was to get rid of the remaining blue stuff, and add more GPness to the interior. My cabrio had a blue interior originally – which meant the door panels, door sills, and rear side panels were all blue plastic. Also blue carpet. When I originally did the rear seat delete last year, I had carpeted the rear with blue Ozite carpet. All that blue needed to go, to get to a “proper” black GP interior.

Yesterday I pulled the black carpet out of GP0769. That was a chore, especially since it was the first time I had ever done it. 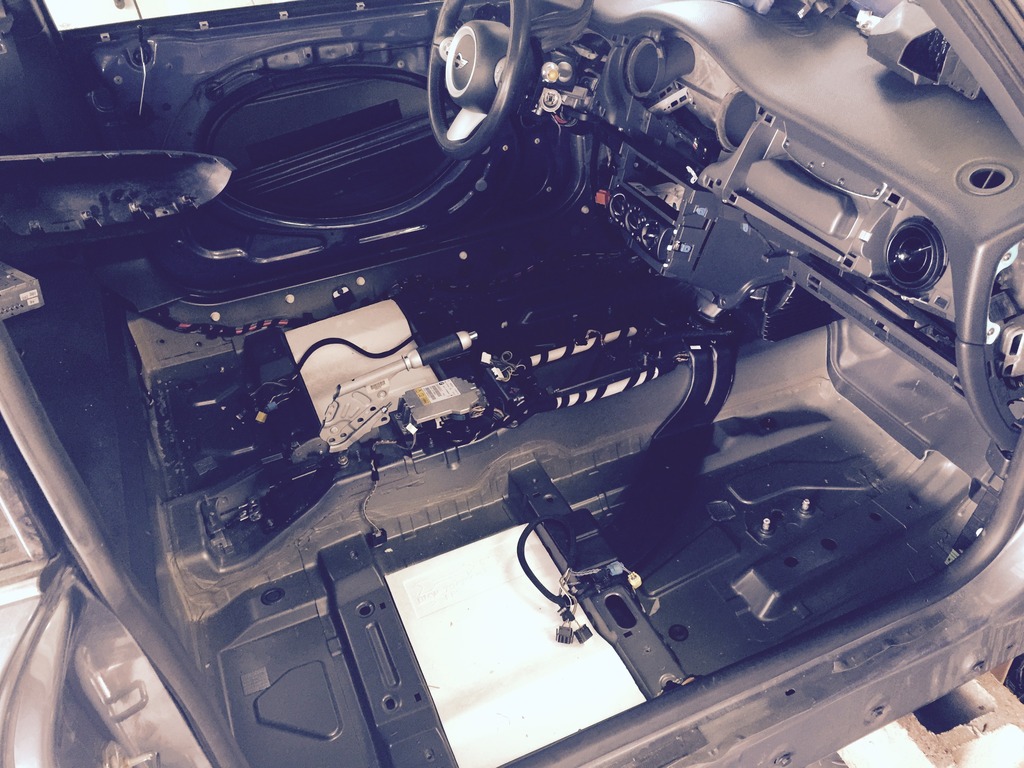 I also painted the rear cabrio interior side panels. New ones of these are kinda pricey, so I had hunted around for a salvage cabrio with black interior. But hadn’t been able to find one nearby. I decided I’d paint the panels, but then spent a couple of weeks looking for the best color match plastic paint for the Panther Black trim. Bought a lot of cans of paint and sprayed test pieces, until I found what I was looking for.

Eventually settled on Duplicator Vinyl & Fabric black, with Rustoleum Fusion Satin Burgundy for accents. The black is a little “blacker” than the Panther black… but there are like 4 different shades of “Panther Black” in my car, so it doesn’t really matter. The hue is right, and the texture / level of gloss is right. 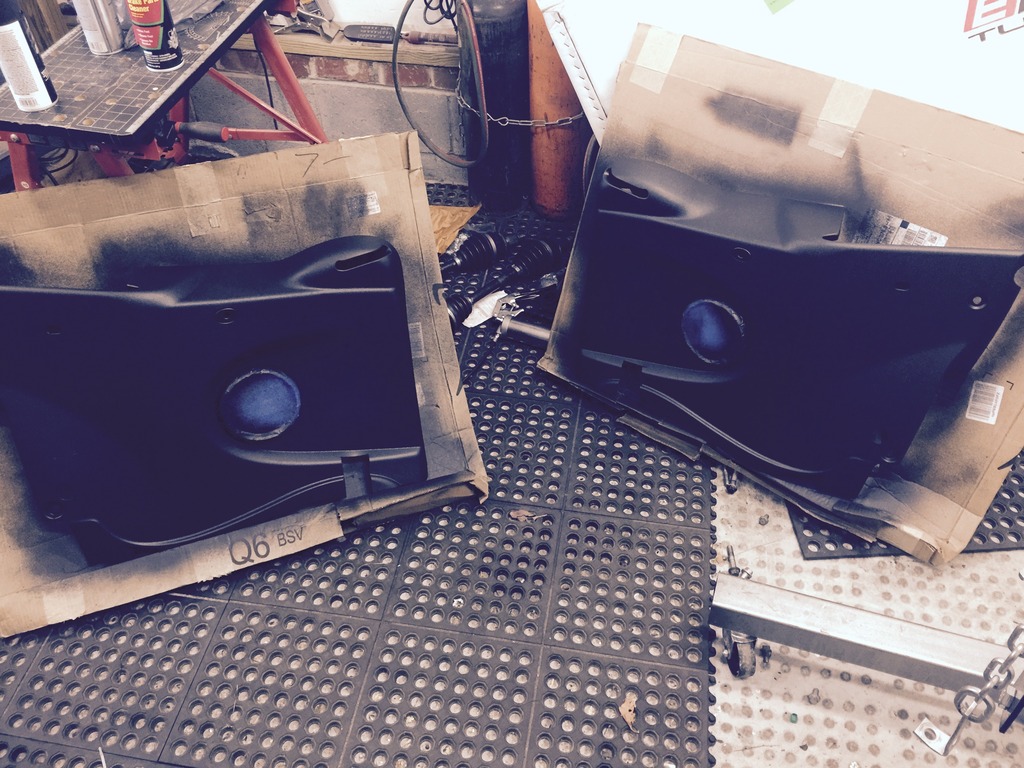 I wanted to do some highlights to match the red rear trim in the GP, that also worked with the natural contours of the cabrio side panels. I played around with designs for a while, then masked and painted. 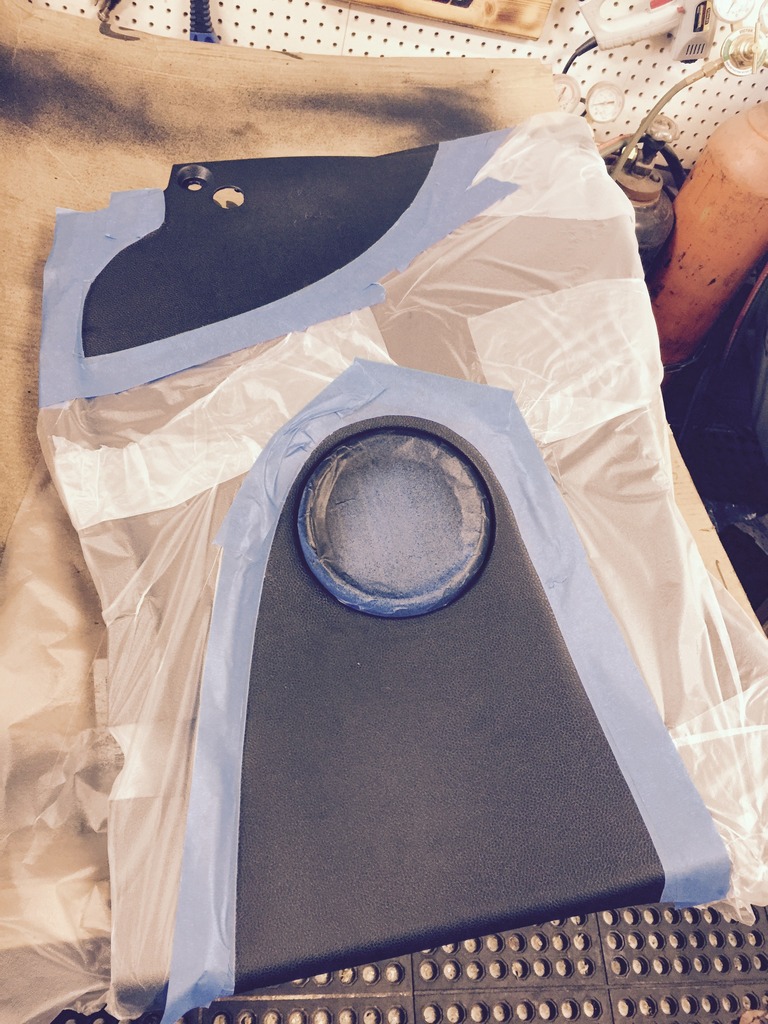 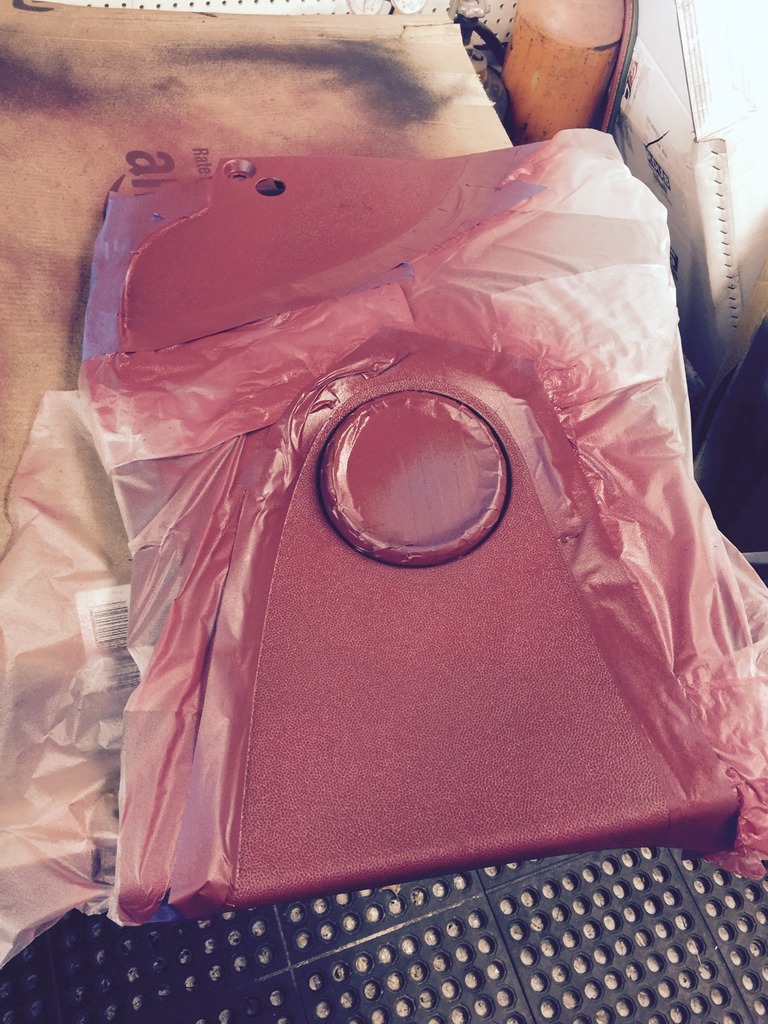 I think they look fantastic. The color is almost perfect. 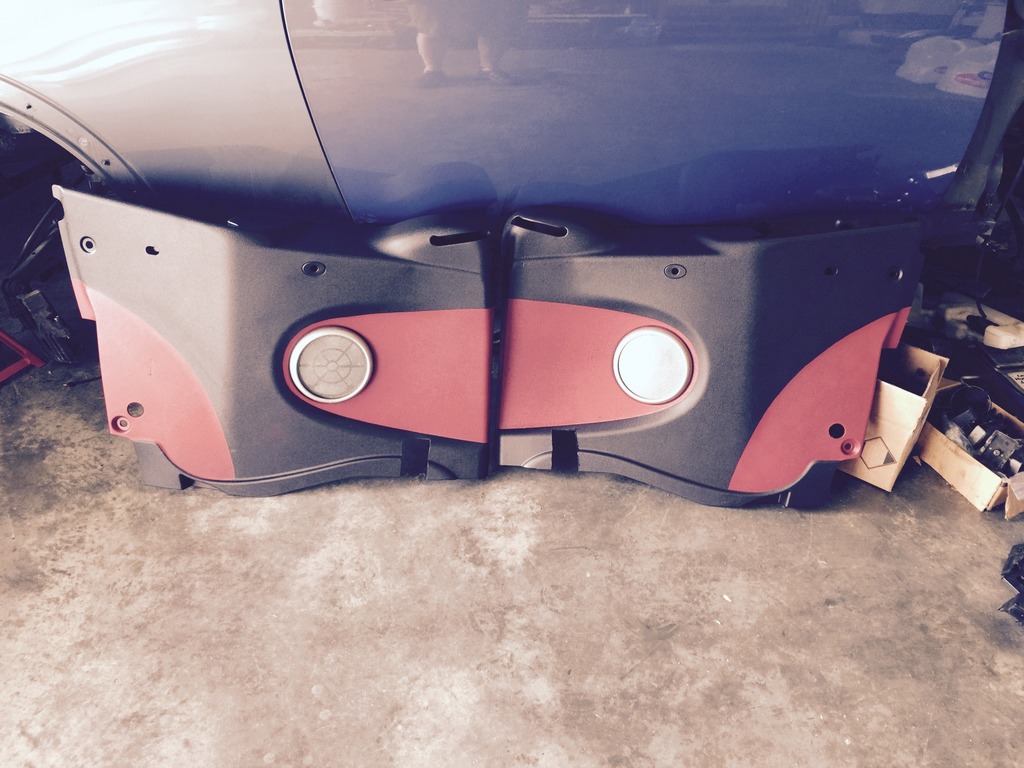 Today, I turned my attention to the carpet in the cabrio. Well, pretty much everything has to come out. 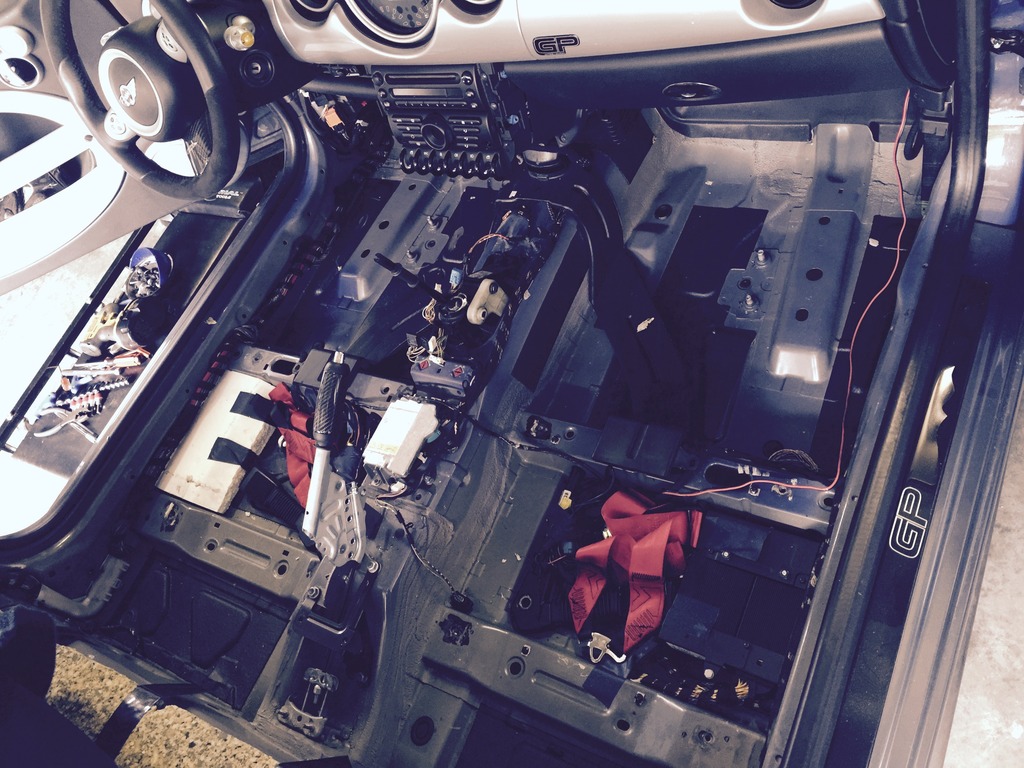 While I was at it, I got rid of the (now) useless plastic duct that feeds air/heat under the seats. I taped up the little duct that fed this, so now I’ll get better flow in the front. Like that matters. I also got rid of more obsolete wiring, from my former under-seat LEDs, and my former air horn. Wiring is closer to stock now, than it has been in probably 7 years. 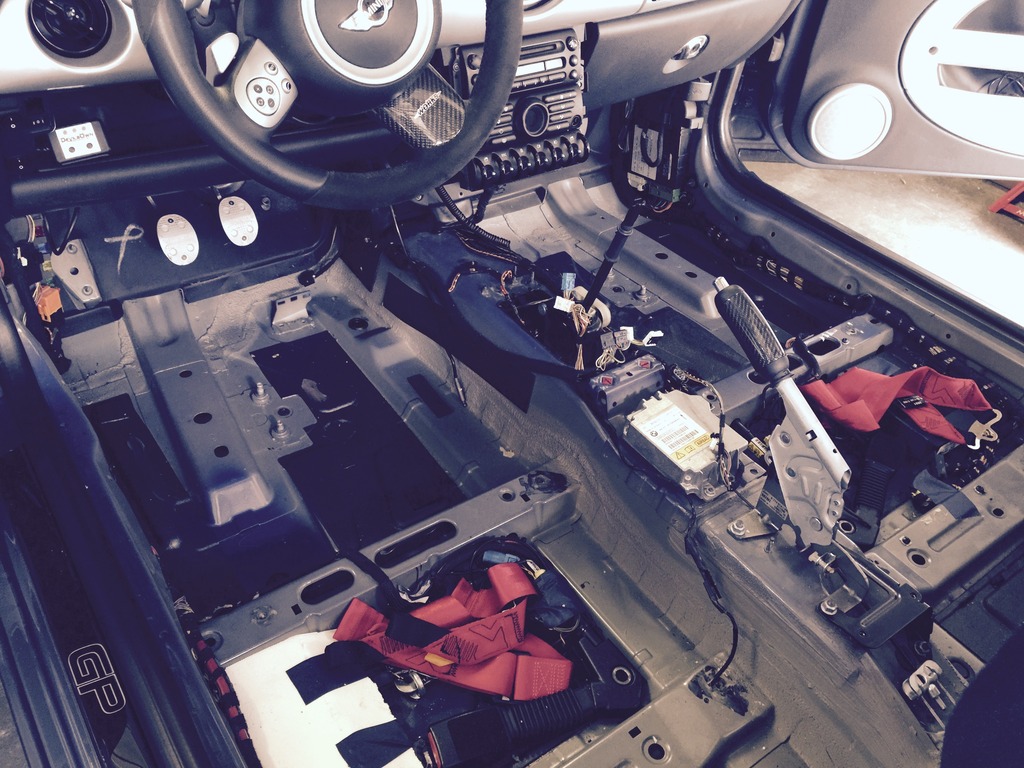 I already knew the cabrio carpet and the coupe carpet are a little different. The coupe has about 1.5″ more leg room in the rear. They had to move the rear seat forward in the cabrio to accommodate the folding top. Here’s a comparison that shows the difference. It’s not much. 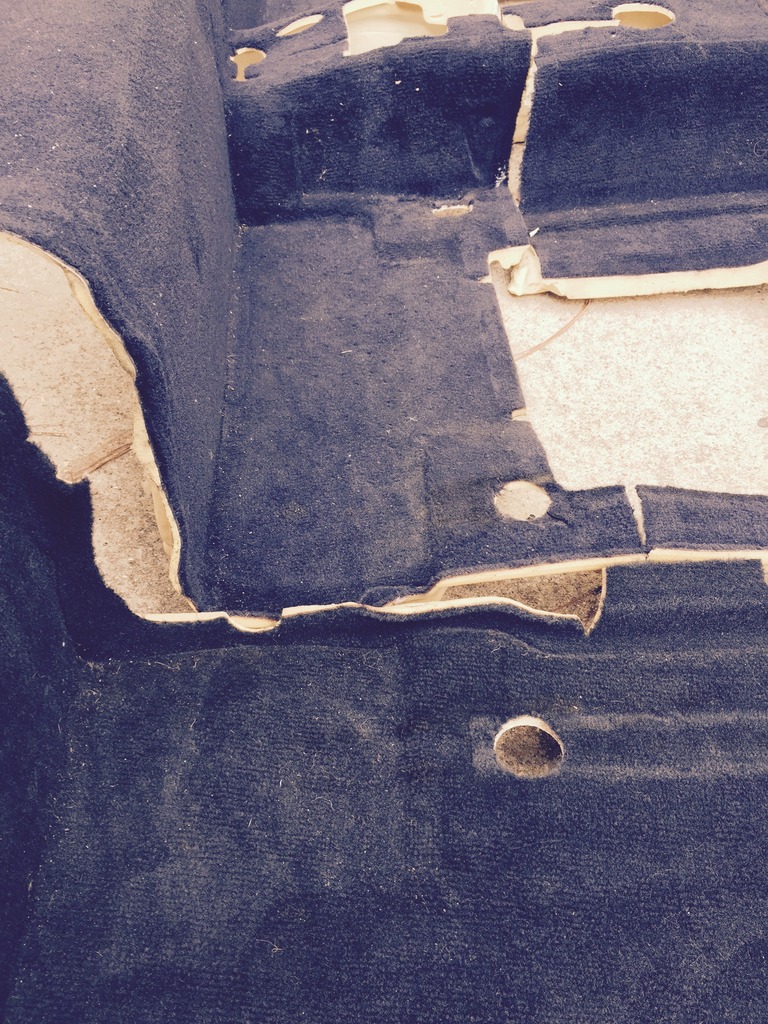 I found that if you remove the foam backing starting a couple of inches forward from the back edge of the footwell, and all the way to the rear edge of the carpet, it will fit in the cabrio just fine with no cutting. So that’s what I did.

Installing OEM carpet in a MINI is like wrestling a 300 pound man. It’s intense. The carpet fits TIGHTLY under the AC unit in the center stack, and there’s no good way to “push” carpet into this position. Eventually I decided I could make it easier by removing most of the foam off the back of that area of the carpet, since I don’t really care about sound insulation, etc. anymore. That made it easier, but it was still a chore. 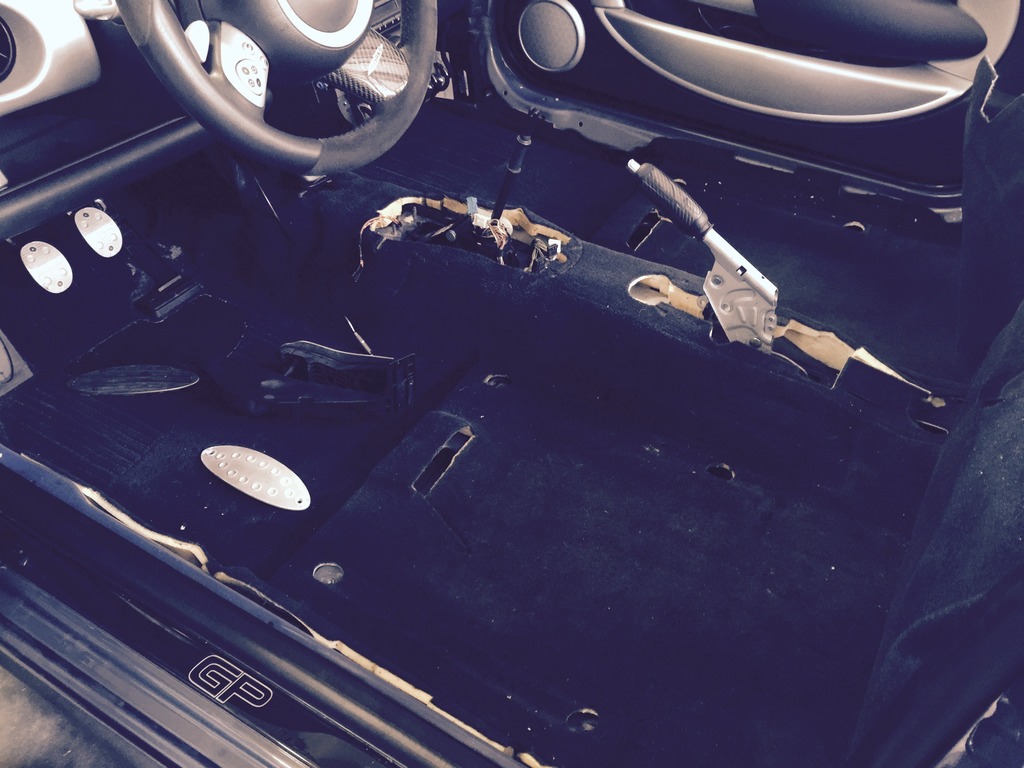 Hot-glued my new Redline black microsuede boots to the frames, and installed them while I was at it. 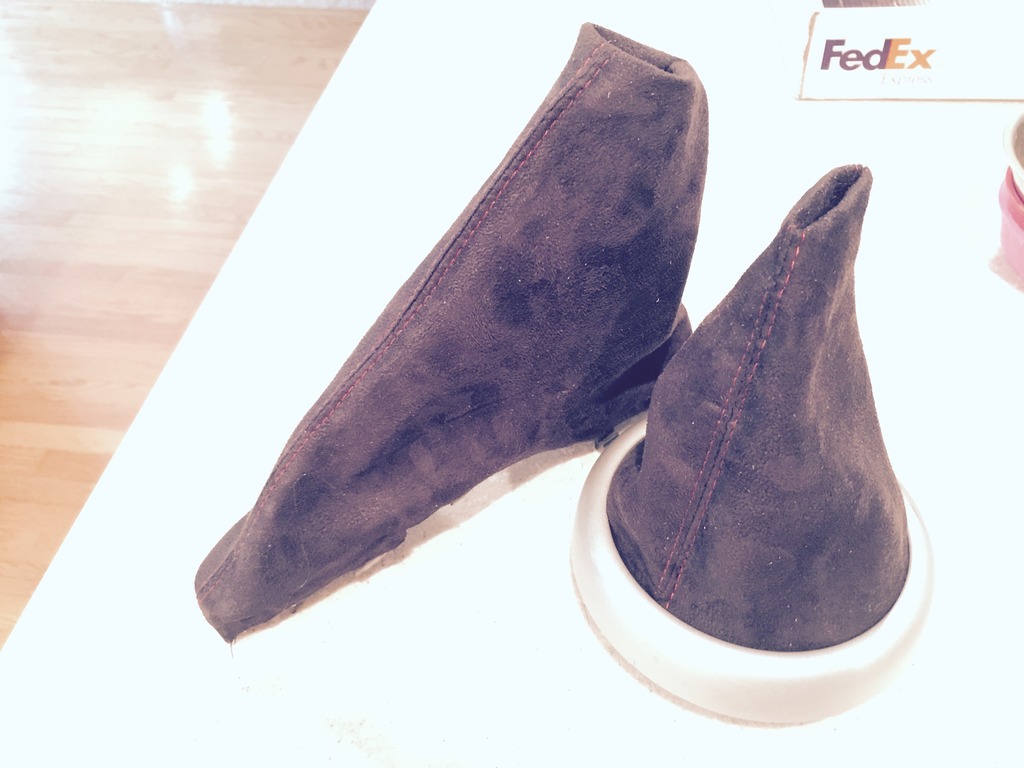 Refitted the pedals and trim in the front. I bought new Panther Black sill trim, and the required clips. 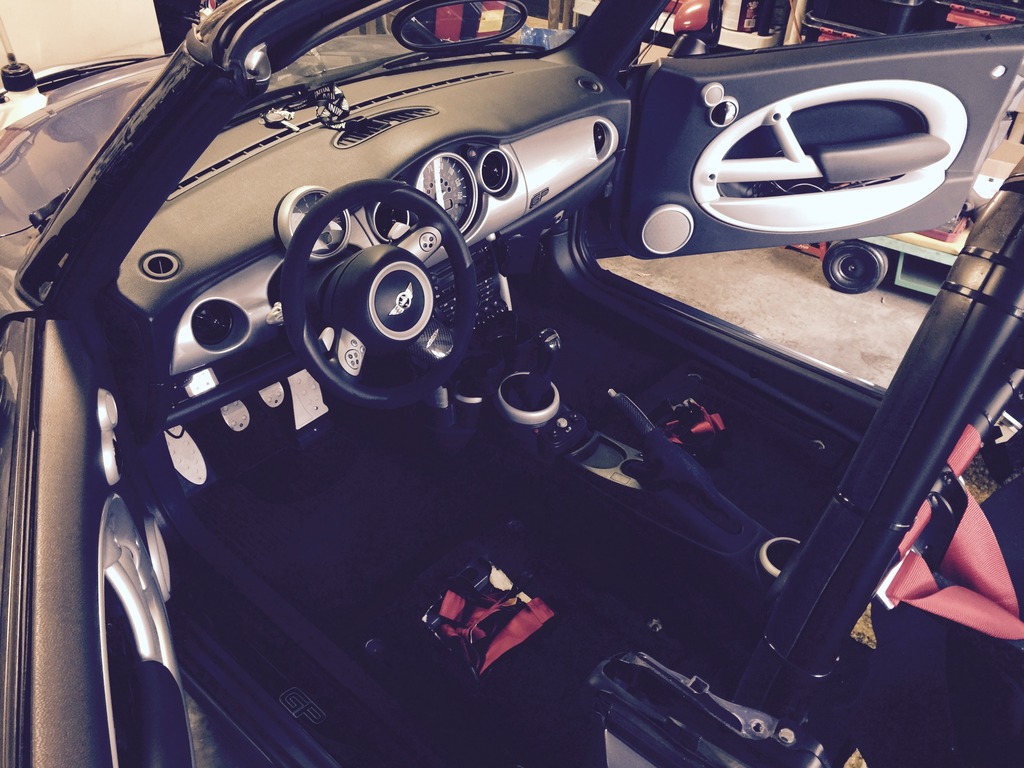 Then got to work on the rear. It’s a zillion times easier carpeting something like this when you’ve already done it once, and can use the old piece as a template. Plus the padding was already installed. Took about 1/5 as much work as the first time. 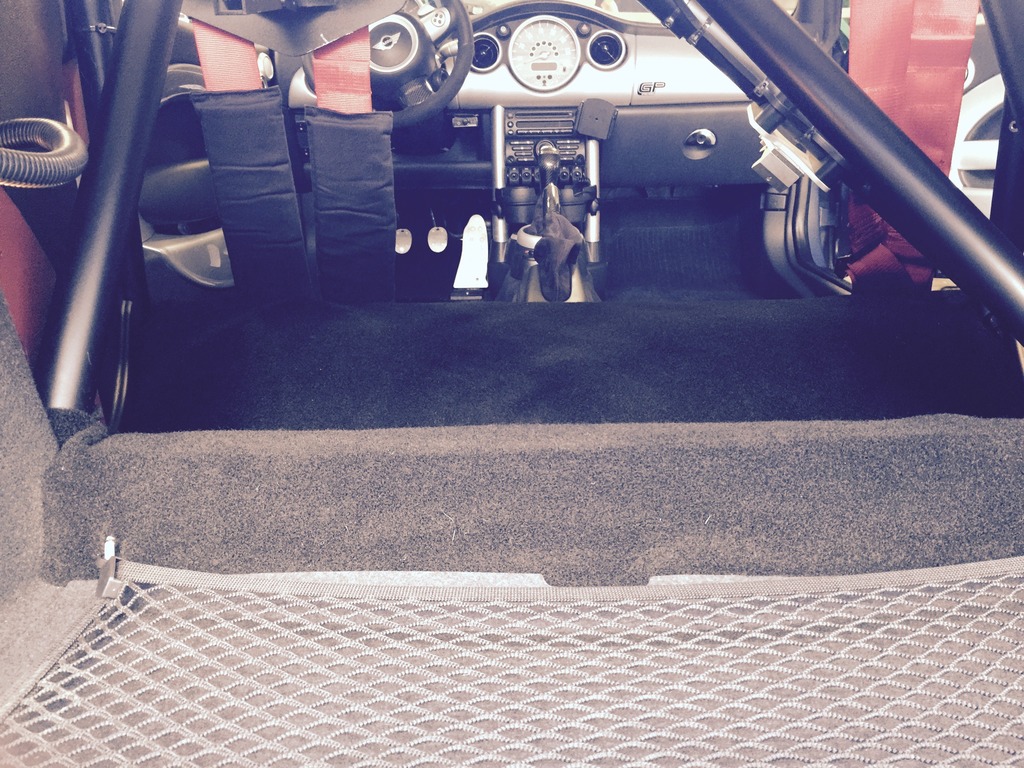 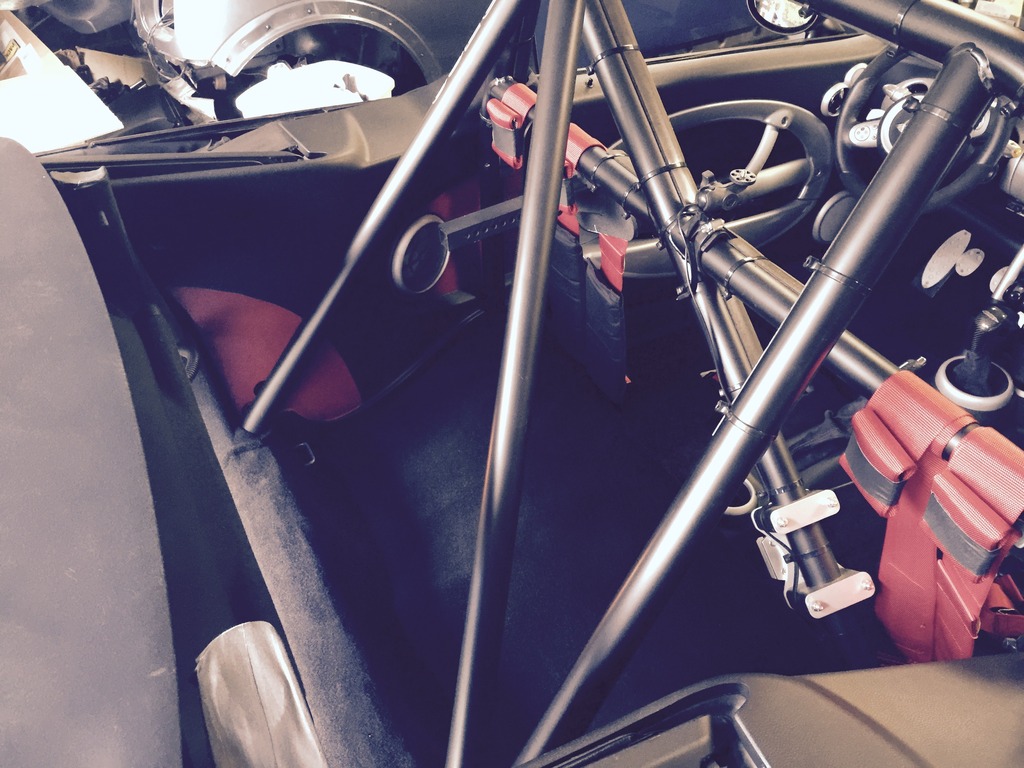 Put the seats and harnesses back in, washed the nearly-new rubber mats that came in the GP, and put it all back together. Looks as it should, IMO. I love it. 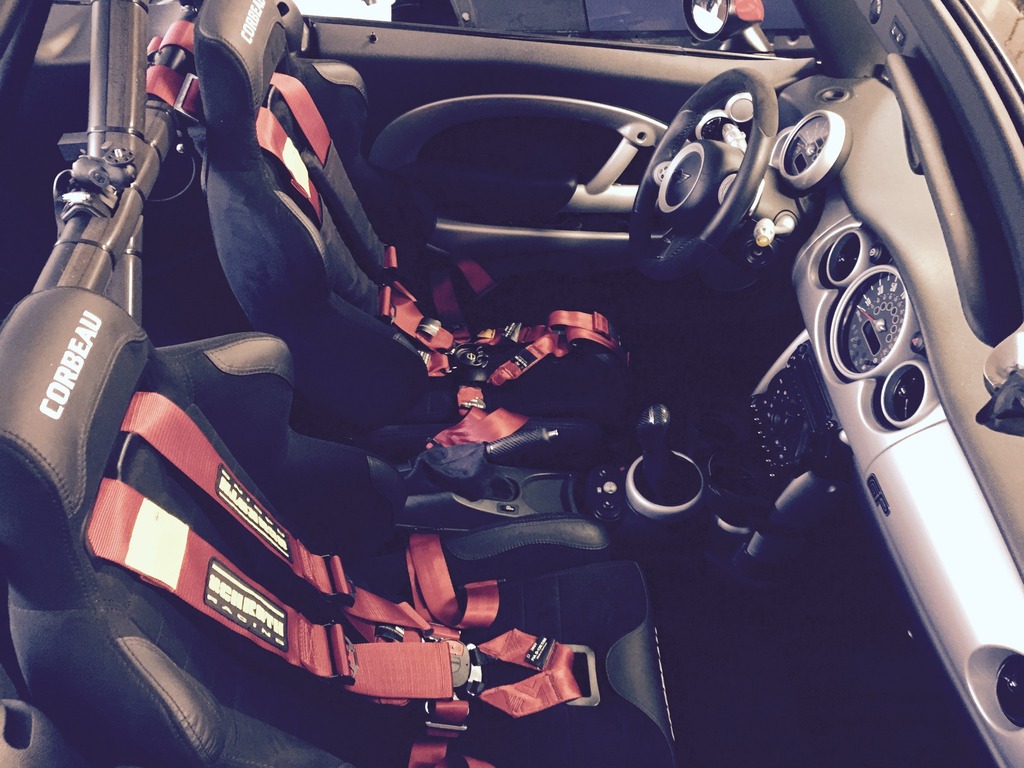 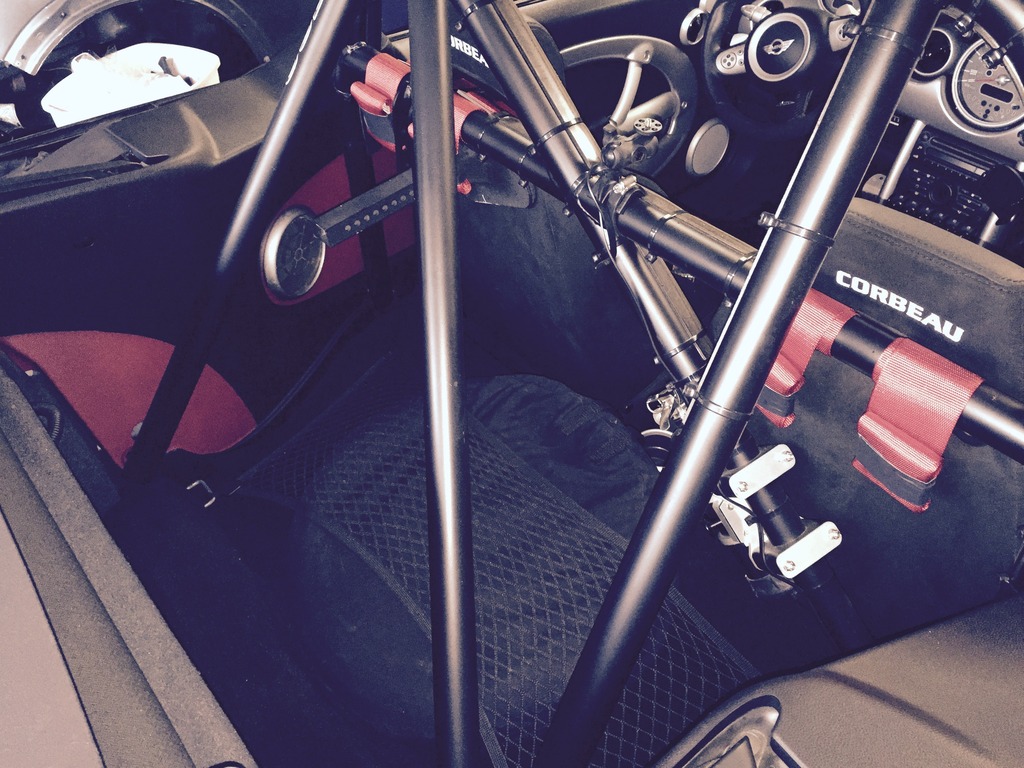 For anyone who worries about such things: no, I’m not relying on the net to hold the spare in. There’s a hidden steel spare tie-down inside the bag, doing its thing.