Another great day. Spent most of the day getting things buttoned up and really drivable.

First task of the day was to get back-up lights working, as I need them for state safety inspection (that’s past due). Spent a couple of hours this morning researching wiring diagrams, figuring out what to look for and what to do about what I might find. I dug into both the back-up lights, and the clutch switch, in case the car didn’t start this morning… I’d need to address that as a long-term fix.

As it turned out… the clutch switch appears to be a non-issue. The car started every time I tried today. I really have NO IDEA why it didn’t start at first yesterday, or what voodoo we did to “fix” it. But it appears fixed. But I have a plan to add that capability to the roadster in the future, if needed.

For the back-up lights, I determined that the main body harness connector DOES have the signal wire to the lights (pin 1). I hit it with 12v and the lights came on. And, with the main engine harness connector plugged in, this had continuity to the transmission reverse switch. I figured the switch must be bad. I pulled it and tested it.. and it was fine. Hmmm. I traced the power wire from the switch back up the engine harness to the connector, pin 2. But pin 2 of the body harness side of the connector was EMPTY. That’s right, for some reason, they half-wired this circuit on the automatic transmission body harness.

I confirmed that the same wires terminated at the auto transmission gear selector switch (on the transmission). So I made a 12″ jumper wire with plugs on the end, put wire taps on the power wire on the engine side of the main connector, and on the transmission harness. Plugged it up and VOILA. Everything works as it should, using the factory fuse and wiring for the back-up lights. All good.

Then spent an hour or so fiddling with coding on several modules, to get the windows and convertible top behaving the way I wanted, getting the remote opening and closing things as it should, trying to tell the car how many airbags it really has, etc. Turns out it’s the double whammy to attempt this on a convertible… because there’s lots of oddities that come with the automatic, and a whole other set of oddities when it’s a cabrio. Eventually got most things sorted, though (at this time) the car still thinks it has side and head airbags… I’l fiddle with that more later. Put a piece of tape on the inside of the airbag light on the speedo face… so it really doesn’t matter.

Then I spent a few hours finishing up the body work – mounting A-panels, wheel well trim, bumper parts, rewiring my Hella horns, fighting with a mis-aligned bonnet that wouldn’t (and still won’t) latch all the way. Can’t find one of the GP side scuttles, it’s in the garage somewhere. It will turn up. I have another pair in a box somewhere.

Finally got things torqued down, aired up, and ready to roll. Sunny and 55 degrees.

First time I’ve put gas in the car in almost 8 months. Loved tooling around town in the FrankenGP monster. 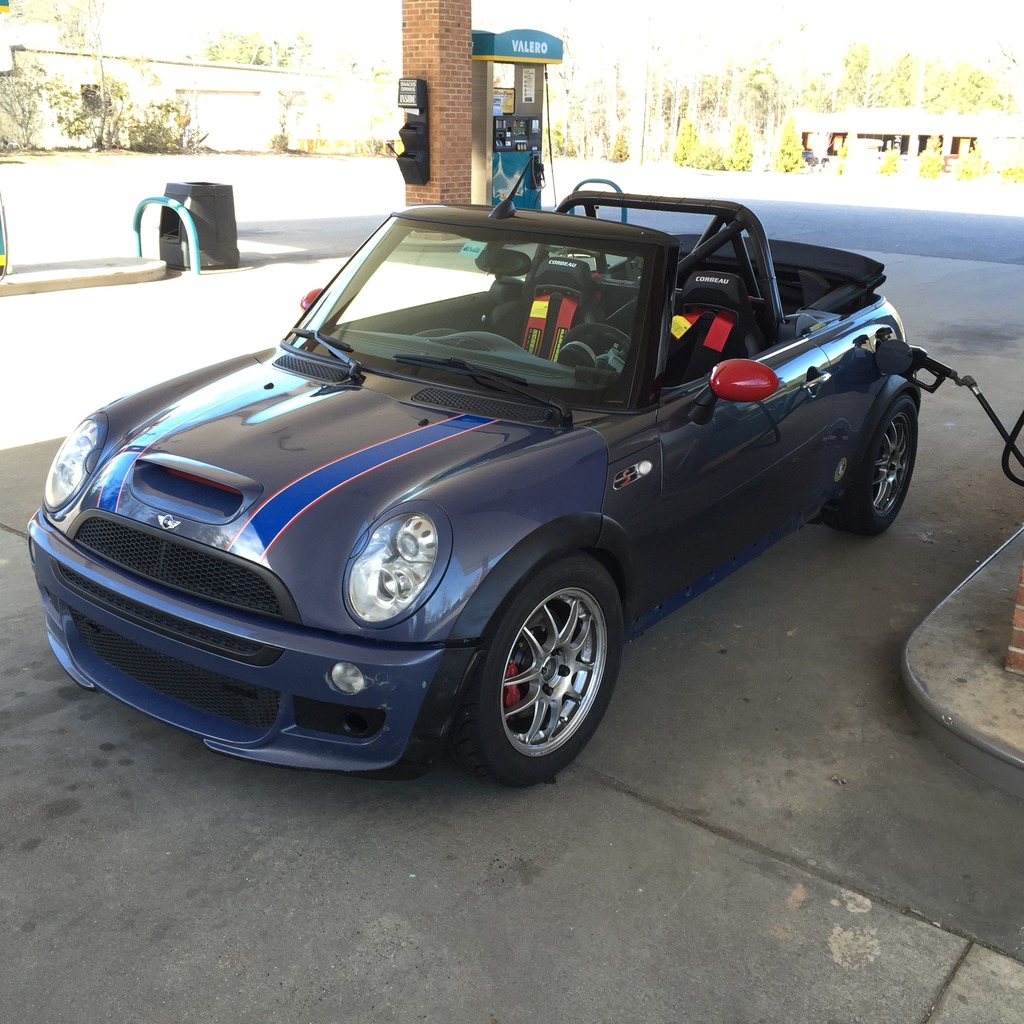 Took it on my favorite 50 mile twisty country route near home. FLOGGED IT.

The car is A BEAST now. Night and day difference. It was quick before. It’s almost terrifying now. Between the new GP-based RMW tune, the extra 2 pounds of boost (found and fixed a long-term leak), the high-revving redline, the elimination of the torque converter and the slipping auto tranny clutches, the factory LSD, and approximately 200 pounds (maybe more) I’ve taken out of the car and myself (so far), the car MOVES. And sounds like a force of nature. And I love the GP cockpit.

I honestly wouldn’t be happier, if I had woken up to a Ferrari in the driveway. I love this car. And it’s going to get even better.

It’s only been three weeks since I decided to punt on the auto, and do the swap. 2.5 weeks since I bought the GP. 2 weeks since the GP arrived. Damn. Sometimes, things happen FAST.