I installed my H-Sport 19mm rear sway bar today. Details on how are below. But now, between that and the USS, Blimey is BEGGING for more throttle in the twisties. The more throttle I give him, the better he carves his way around the corners (oh yeah, and he goes faster, too…). It’s a little creepy, like the car has developed a mind of his own. But I LIKE it. “Yeah, baby!”

I ALMOST held off on this. I ordered the H-Sport bar the same time I ordered the USS – about a month ago. But the bar was on backorder and I just received it this week. After reading a LOT of posts about how hard the sway install is on a cabrio, I came really close to just holding the bar until I took the car in for pulley and one-ball and letting Dan the Man do it. But I re-read all the cabrio-specific instructions I could find and decided that you only live once and I needed to sprout a pair and tear my car apart in the garage and hope for the best…

It really wasn’t that hard. I used Randy Webb’s How-to along with the H-Sport provided instructions (which are almost identical). Then I used tips from a number of different sources on the cabrio-specific issues, and improvised a bit on my own. Here are the keys that I think helped make it easy and uneventful:

* I unbolted the rear end of both gas tank straps. This allows the bar to slide a bit up between the tanks and the chassis – which helped a lot.

* I removed the two bolts and two washer-nuts (four different points) holding the middle-rear exhaust heat shield (the one that runs from the middle of the car back to where the exhaust turns toward the resonator/muffler). Then I did some creative heat shield origami to get that shield out from under the shield on the forward end – which let me slide the shield far enough forward to free the edge of the rear shield (the one over the mufflers). Then I could bend that part down and access the cabrio-specific center bolt of the subframe. I did this BEFORE removing the other subframe bolts – so once this step was done, everything else works just like the hardtop install. Using the heatshield origami approach not only provided a relaxing creative exercise, but also prevented any cutting or destruction of the heatshields, which some folks have resorted to on the cabrio. I was able to completely reverse the moving and folding of the heatshields when complete.

* I removed both rear struts completely. This was easy, and the extra clearance makes fishing the bars in and out much easier.

* Whenever I needed to lift the subframe, I used my race jack to do it. Made things go much easier than trying to fight it by hand.

Here’s the unbolted gas tank strap. The bolt is “captive” – it doesn’t come out of the strap. Removing these (one for each tank) allows the bar to move forward between the tanks and the chassis – a big help in my install. 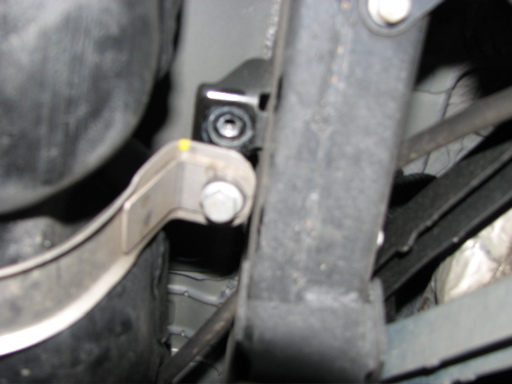 Here’s a photo of the heatshield origami. This photo is hear the middle of the straight exhaust pipe, where the two heat shields overlap. The bottom of the photo is toward the rear of the car. The upper (forward) heatshield is originally “on top” of the other one (it’s actually under it, but when you’re laying on your back, everything is kinda reversed) – preventing it from sliding forward. I carefully folded the edge of the forward shield down and forward, and slid the rear shield back as far as I could – this allowed me to get the rear (bottom) shield out from under the forward one and then slide it forward far enough to free the edge of the rearmost (muffler) heatshield. Note the stud on the right side of the photo – this and it’s twin on the other side (obscured in the photo) are what the nut-washers thread onto to hold the heatshields in place. 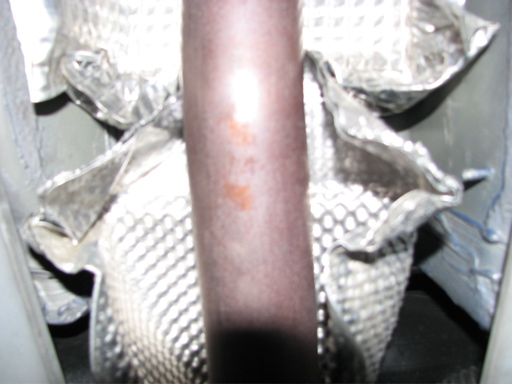 Below is the view of the rear heatshield, as seen from the driver’s side of the car. The corner that is bent down is actually the forward edge of this heatshield, which was trapped behind the rear-middle shield before it was moved forward. The hole is where one of the bolts that secures this heatshield goes. 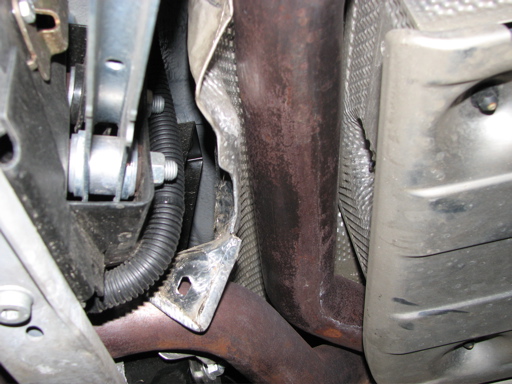 The cabrio-specific 5th subframe bolt is up under there, you bend the heatshield away to access it. You’ll need a 16mm socket and a universal joint and an extension – or you can fight it without the universal if you misplaced yours (like I did).

The new bar in place, before reassembly. The H-Sport stickers are good for at least 5 hp. 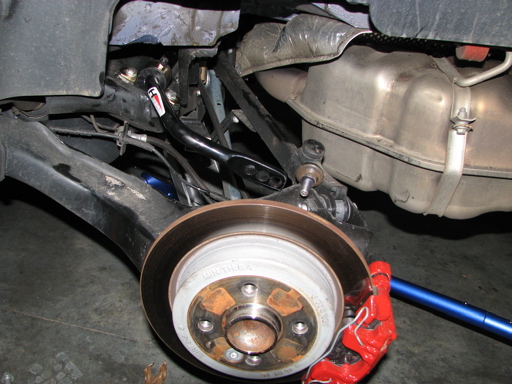 I did the entire install in about 3 hours including cleanup. Completely solo. I never felt like I needed another set of hands to pry or pull or lift – I was easily able to do it all with just the jack. And since no local MINI owners volunteered to come supervise and help, it was MORE BEER FOR ME…