While some of the early MINIs had “anemic” horns, the horn in my 2006 just sounds… average.

Average in every way. Volume, tone, resonance… it sounds pretty much like every “normal” car horn out there.

I guess I shouldn’t complain. Some owners of early MINIs have complained that nobody can hear their little toy-car-sounding “beep beep”. Other people can certainly hear my horn. They just don’t care very much. When I sound the horn, their response is:

1) Think, “Hmmm. Somebody in some kind of car is honking their horn.”

4) Turn to look and see where it’s coming from and whether it might have something to do with THEM.

And, of course, by this time I have already used my cat-like reflexes and the MINI’s legendary agility to evade whatever idiotic thing they were doing that made me honk in the first place.

If they’re, say, pedestrians crossing against the light, they look up and say “Oh, it’s just one of those clown cars” and keep right on doing what they’re doing.

So for the past year or so I’ve been contemplating a horn upgrade. I’ve looked at various kinds of compact air horns – things like this:

or this. Now, while these certainly have a more distinctive sound than the MINI’s horn, and they’re piercingly loud, they still don’t command the kind of respect as, say, a gigantic Peterbilt bearing down on you….

So I kept looking, and thinking.

Until three weeks ago.

That’s when I found Aaron Granger’s post on NAM about his latest mod – a real, honest-to-goodness train-type air horn installation on his MINI.

I immediately, wholeheartedly, and maniacally bought in to this insane idea. Why have a MINI that sounds like a mere car, when it could sound like a LOCOMOTIVE?

Read Aaron’s post if you want the details of what he did. But the short version is, he connected an inexpensive but nice quad-horn rig from ebay to a paintball CO2 cylinder, via a Kobalt air tool regulator. In his case, he used a super cool cable rig to activate it with an analog valve like you’d find in a big-rig. The unit was installed in one of the exhaust bays under the rear of the MCS, thanks to a single-sided exhaust. The results were stealthy, fantastically loud, and very, very cool.

Aaron chose the CO2 power source over a traditional air tank and compressor for space and noise reasons – the MINI doesn’t have room for a large air tank, so the tank would need to be refilled by a compressor nearly every time you used the horn. And those little compressors can be quite loud and distracting. With CO2, the system is very compact and truly stealthy. Blue Rhino refills these tanks for about $4 to $7… so it’s not free, but given that you should get LOTS of horn time out of a single tank, it’s fairly cost effective.

So I shamelessly copied Aaron’s idea (with his permission, like that would have slowed me down) and purchased the same horn and regulator setup. But from there I deviated a bit from his original design.

Since I have a one-ball exhaust, my available space was on the passenger side, not on the driver’s side like Aarons. Aaron put a lot of effort into adapting an enclosure for the bottle and regulator. I chose to go “nekked” and mount them exposed under the car. While I LOVE Aaron’s cable setup, I chose to take the lazy route and use an electric solenoid to activate mine. Originally I was going to use an interface kit from newministuff.com to tie this to the unused phone button on my steering wheel. But, alas, these kits have been discontinued. So I opted for a simple pushbutton on the shift console. 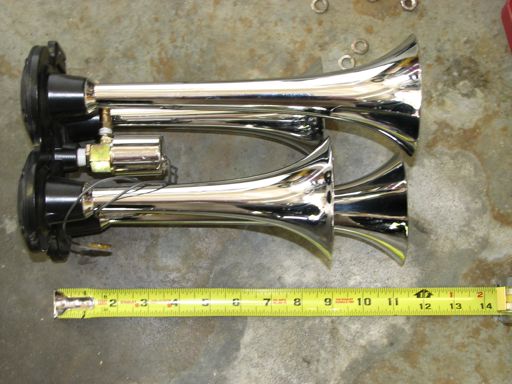 Here are the 20oz CO2 tank and the regulator (with the rubber shroud removed): 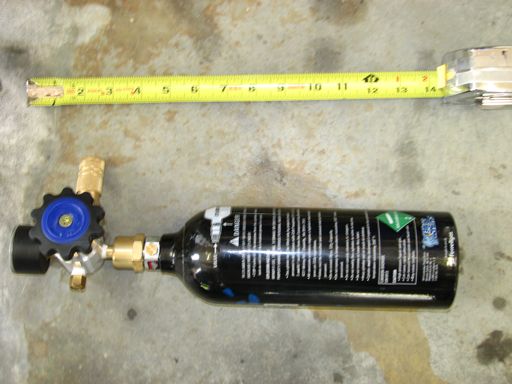 And here’s the space I had to work with under the car: 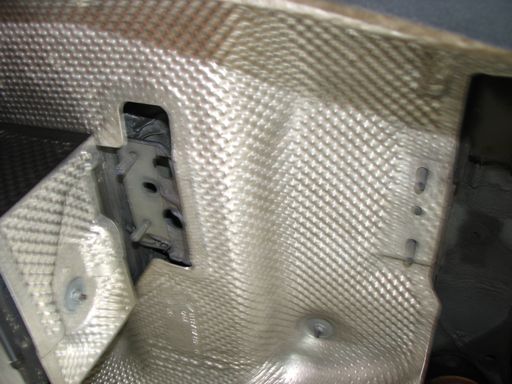 I fabricated and welded a bracket to attach the horns to the inner studs from the original exhaust resonator hanger bracket (they’re M8x1.25 thread, by the way). 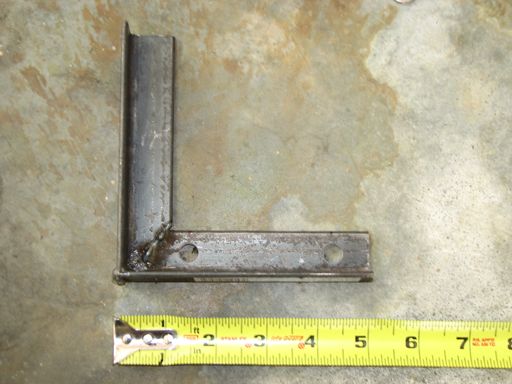 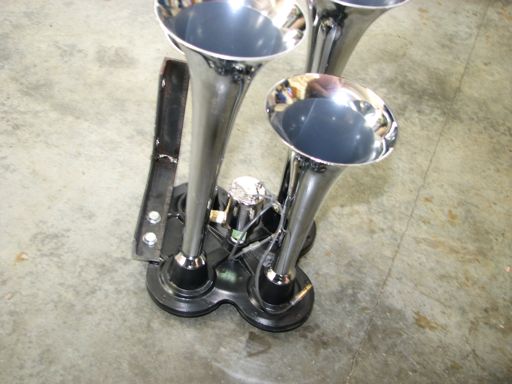 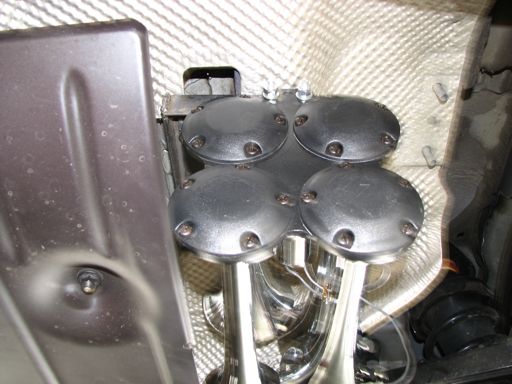 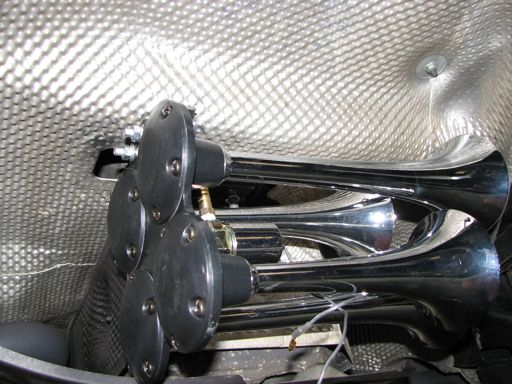 I fabricated and welded another bracket for the bottle. This attaches to the outer exhaust studs, and has two slots for 1″ nylon tie-down straps which hold the 20oz CO2 bottle securely to the bracket. 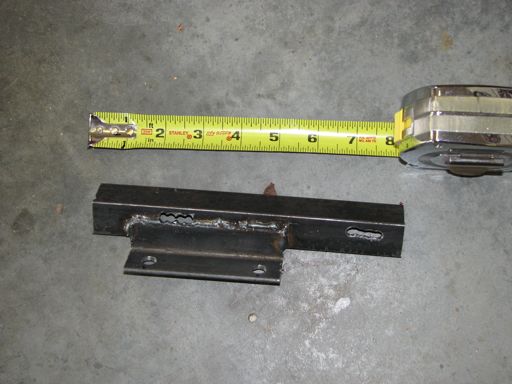 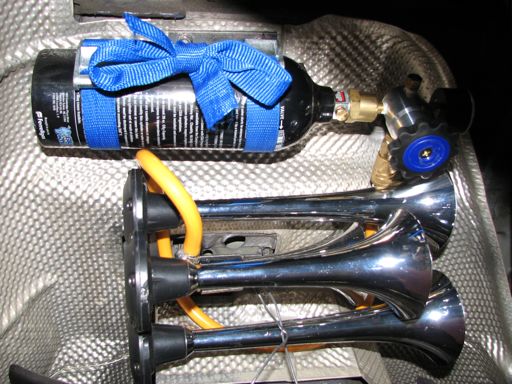 I bought a stubby hose from Northern Tool, added a quick-connect, and used this to connect the regulator to the solenoid.

The solenoid is wired to a momentary contact pushbutton switch, which draws power from the cigarette lighter circuit (so the car must be switched on to “arm” the horn). The wire for this runs through an unused rubber grommet behind the emergency brake handle, into the exhaust tunnel, down the passenger-side e-brake cable housing, over the heatshield and to the horn assembly.

Note that it’s VERY important to thoroughly leak-test the regulator assembly and all connections with soapy water. The regulator connections are prone to leak if not sealed and tightened well. While this wouldn’t be an issue with a compressor and air tank, with CO2, it will just leak until all your CO2 is gone – then you’ll have to get a refill.

I’ve tested this at 100psi so far. The regulator goes up to 120psi and the horn is rated to handle that pressure. I should be producing about 150db (!!!) at that pressure. I know that at 100psi, when in an enclosed area, it sounds like the world is coming to an end… It’s impossible to accurately reflect the tone, resonance and volume of this setup in an audio file – you really have no idea how LOUD it is until you hear it in person. But here’s Aaron’s video that will give you some idea of the sound.

When I blow this thing, the response it creates is:

1) HOLY HELL I’M ABOUT TO GET RUN OVER I BETTER GET THE HELL OUT OF THE WAY RIGHT THE HELL NOW!!!

Approximate costs for this mod were:

So about $200 total, and about four hours to fabricate and install.

So for anyone considering this mod, here’s an update on mine:

I’ve replaced the Kobalt air tool regulator with a paintball/airsoft regulator from Palmer-Pursuit.com. It’s the “Stabilizer” female regulator with low-pressure kit installed (specify it that way when you order). This regulator seems MUCH more rugged than the Kobalt, and my Kobalt was always a little leaky, I was only getting a couple of weeks before the 16oz CO2 cylinder leaked down. I’ve been on one bottle for a month now with the Palmer regulator, with LOTS of horn use at club events, and it’s still going strong. The Palmer regulator also supports higher pressure and flow rates – meaning it’s LOTS louder now than it was at MOTD. I love it.

Here’s a shot of my current rig: 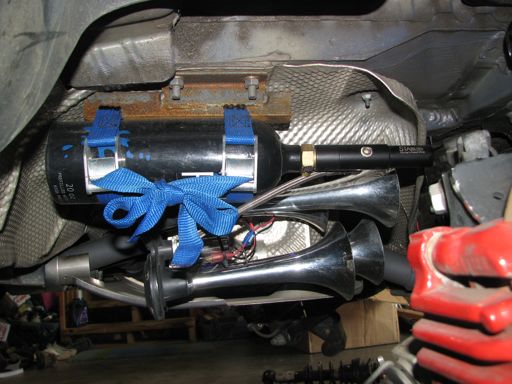 I also wired in a 12v wireless remote trigger that I got for about $15 bucks on eBay. Wired that in hot to the battery, so I can trigger the horn from about 50 feet away with a little key fob remote. A great way to scare the beejeezus outta unsuspecting “victims”…